Women Fall Off Swing On The Edge Of A 6,300-Foot Cliff In Chilling Video

The women were sent hurtling off the cliff edge when one of the swing's chains snapped. 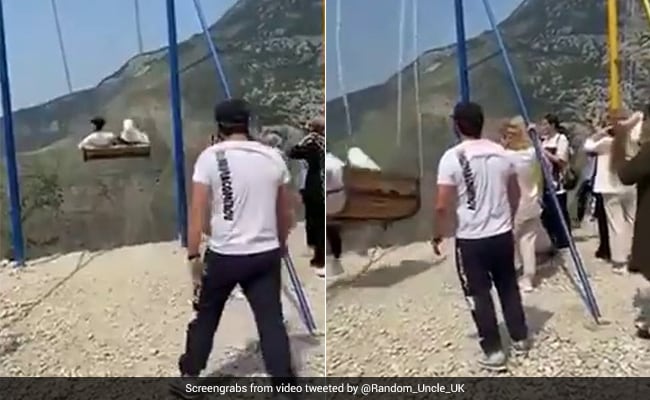 Two women escaped with minor scratches after falling off a swing on the edge of a cliff.

Two women escaped with minor injuries after falling off a swing perched on the edge of a 6,300-foot cliff in Russia. They were taking a ride on the swing over Sulak Canyon, located in the Russian Republic of Dagestan, when one of its chains snapped and sent them hurtling off the cliff edge, reports Daily Mail. Luckily, a small wooden platform located just beyond the cliff edge broke their fall and very possibly saved their lives. The two women escaped with only minor scratches, though they were left shaken by the incident.

A source in law enforcement told the Komsomolskaya Pravda newspaper: "The women got scared and sustained scratches, but neither of them suffered serious injuries."

"It is chilling to imagine what could have happened if they slipped when the swings were at a maximum height," the source added.

Footage of the incident has been shared widely on social media. It shows onlookers screaming in shock as the chain snapped and the women fell over the edge.

Moment two women fell off a 6000-Ft cliff swing over the Sulak Canyon in Dagestan, Russia.
Both women landed on a narrow decking platform under the edge of the cliff & miraculously survived with minor scratches.
Police have launched an investigation. pic.twitter.com/oIO9Cfk0Bx

Police have now launched an investigation into how the huge safety lapse occurred, while The Ministry of Tourism in Dagestan said the swing "did not meet safety standards" and that law enforcement agencies and other services are "already conducting relevant checks to ensure that nothing threatens lives and health" in the future.

In January, a woman slipped and fell off the edge of a 650-foot cliff in Carinthia, Austria. Miraculously, she survived the drop thanks to snow breaking her fall.