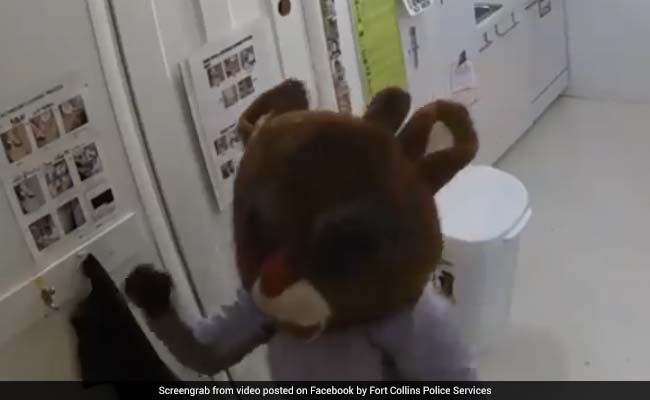 The Rudolph burglar was caught 'red-nosed' on camera.

Rudolph the red-nosed reindeer seems to be exploring alternative career options. Security footage released by police in Colorado, USA, shows a woman wearing a Rudolph mask to conceal her identity during a burglary. Dubbed 'Rudolph the Red Nosed Burglar' by Fort Collins Police, she has now gone viral on Facebook for her bizarre Christmas-themed disguise.

CCTV footage shared by Fort Collins Police Services shows the woman entering a room wearing a large furry Rudolph head. "Santa's helper" is then seen helping herself to some things kept inside the room, putting them inside a bag. At one point, she removes her Rudolph mask and looks directly into the security camera.

"In the early morning hours of December 18, someone actually broke into a business in the 300 block of Hickory Street and stole several items...while attempting to disguise herself as one of Santa's helpers. If you have any info about this incident or know suspect's identity, let us know so we can notify St. Nick," wrote Fort Collins Police while sharing the video.

Since being shared on Sunday, the video has received over 23,000 views and a ton of amused comments.

"In light of this new evidence, will the 'Grinch' now be exonerated?" one commenter wondered. "The theft isn't funny at all, but the means it was carried out by is absolutely hilarious," wrote another.

In July this year, another innovative disguise went viral on the Internet when a robber used a pair of boxers as a mask.