Why Sighting Of Rare Rainbow Snake In Florida Is Significant 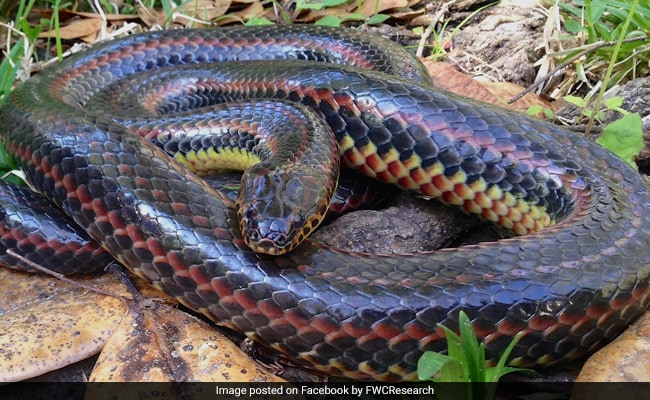 Two women recently found and took photographs of a rare rainbow snake in Florida. It is the first time since 1969 that the species has been seen in the area.

According to a Facebook post by the FWC Fish and Wildlife Research Institute, Tracey Cauthen spotted the colourful 4-foot rainbow snake while hiking in the Ocala National Forest. Daily Mail reports that she was accompanied by Rebecca Boyer when she stumbled upon the rare snake, known for iridescent black-blue back with red and yellow stripes.

"The Florida Museum of Natural History confirms this is the first record of this species in Marion County since 1969," the organisation wrote. The museum also said that rainbow snakes are nonvenomous and harmless. They speculated that the recent change in water levels of the Rodman Reservoir may have forced the "highly-aquatic" snake out of hiding.

The sighting of a rainbow snake in Florida is significant not just because these creatures are highly elusive, but also because they had been presumed extinct in the area.

The Center for Biological Diversity in Florida had petitioned to protect the South Florida rainbow snake under the Endangered Species Act in 2010. The Center says that in response, the next year the federal government deemed the rainbow snake extinct without conducting a thorough survey to back up their declaration. The Center had also offered a $500 reward for any hard evidence of the animal's existence.

Ms Cauthen and Ms Boyer's sighting makes it the first time in 50 years that a rainbow snake has been seen in the area.

According to the Florida Museum, rainbow snakes, also called "eel moccasin" for their diet of eels, are "large and thick bodied" reptiles that grow up to 40-54 inches.