"When Pops Is The Boss": Father-Son Duo Pilot Flight Together In Viral Video

In another post, Mr Lake revealed that he was flying with his father as a pilot after almost three years at Delta Airlines. 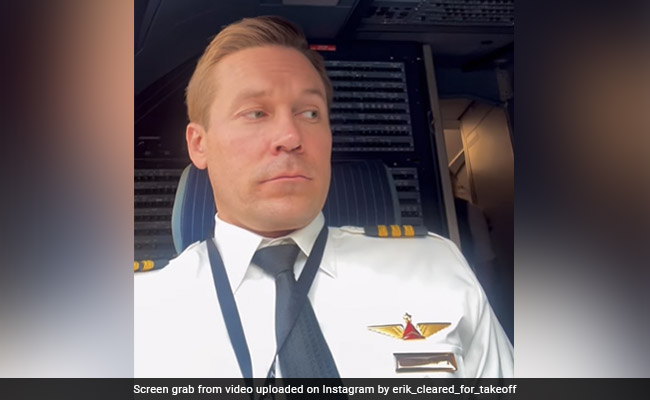 Mr Lake shared that his father is retiring in 18 months.

A video of a father-son duo teamed up to pilot a flight has gone viral. Posted by Erik Lake, the video shows the pilot in the same cockpit as his father. Mr Lake is looking at the camera and slowly pans the camera towards his father who is prepping for the journey ahead. Seconds later, the father notices the camera and smiles. The text on the video read, “When your dad becomes your boss at work for the day”.

Along with the video, younger Mr Lake wrote, "Definitely have to stay on my game when pops is the boss! I was trying to make this funny, but I couldn't keep it together. I may have seen that look a time or two growing up."

In another post, Mr Lake revealed that he was flying with his father as a pilot after almost three years at Delta Airlines.

Mr Lake wrote, "When I was first hired at the company almost 5 years ago, he was an instructor on the same airplane (MD-88) that I was awarded out of initial training so we flew together on my very first trip! We got to fly over ten trips together. Eventually the airplane we were flying was being retired and we moved to different aircraft for seniority reasons. I went to the 737 and he went to the Airbus 320/321. In the last two months, I went to training finally moving over to the Airbus and this past week was our first trip together again."

Mr Lake shared that his father is retiring in a year and a half, "So our plan is to fly at least one trip a month together until he retires and I'll be with him on his final trip. He flew with me on my first flight so I'll fly with him on his last! I'm not quite sure if that's ever been done at any airline, but either way it will be very special for us and our family. It's a rare thing to be able to fly with your dad so I'll continue to cherish every moment we get to fly together!"

Since being shared, the video has amassed over 16 million views so far. Users were surprised with the son's achievement and left beautiful remarks in the comment section of the post.

A user wrote, "I love this!!! Such a cool experience to work with your dad like this." Another user commented, "That is so cool! I'm sure he's so proud of you! I hope you find a wonderful lady!" "That's so awesome! So many memories made between you two flying together! He couldn't hold it together either!" the third expressed.