Whale Found Dead With 100 Kg 'Ball Of Rubbish' In Stomach

Sections of net, bundles of rope, plastic cups, bags, gloves, packing straps and tubing - all of this was found inside the stomach of the whale. 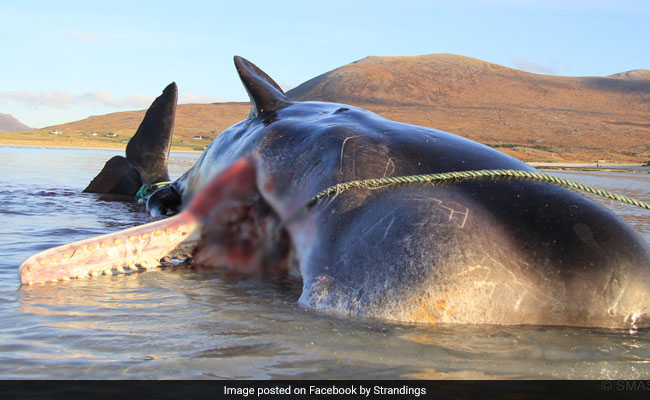 A sperm whale was found with a 100 kg ball of rubbish inside its stomach.

Bundles of rope, plastic cups, bags, gloves and fishing nets are just some of the items found inside the stomach of a sperm whale that washed ashore on a beach in Scotland. The 20-ton whale was found dead on the Isle of Harris, Scotland, on Thursday, reports BBC. Locals who found the carcass said it highlighted the problem of marine pollution.

"It was desperately sad, especially when you saw the fishing nets and debris that came out of its stomach," said Dan Parry, who lives in nearby Luskentyre, to BBC.

The Scottish Marine Animal Stranding Scheme (SMASS), an organisation that investigates the deaths of whales and dolphins, shared pictures of the whale on Facebook. They said that dissecting the whale carcass revealed that its stomach had approximately "100kg of marine debris".

All the material was found in a huge ball in the stomach, they said, and some of it looked like it had been there for some time.

"This amount of plastic in the stomach is nonetheless horrific, must have compromised digestion, and serves to demonstrate, yet again, the hazards that marine litter," the Scottish Marine Animal Stranding Scheme wrote on Facebook on Sunday. They added that the problem of marine pollution is a global issue caused by a "whole host of human activities".

The heartbreaking pictures have been widely circulated online, collecting over 12,000 'shares' and hundreds of comments. You can see the pictures here.

The sub-adult sperm whale was buried on the beach, reports Live Science. SMASS is now trying to figure out how the animal ended up with so much rubbish in its stomach.

This deal whale is another grim example of the adverse effects of marine pollution, and the latest in a long line of photos that highlight the issue. A few days ago, a picture of a seal pup playing with a discarded Starbucks bottle at a nature reserve in UK had gone viral. Before that, a baby turtle was found in Florida with 104 pieces of plastic in its stomach.