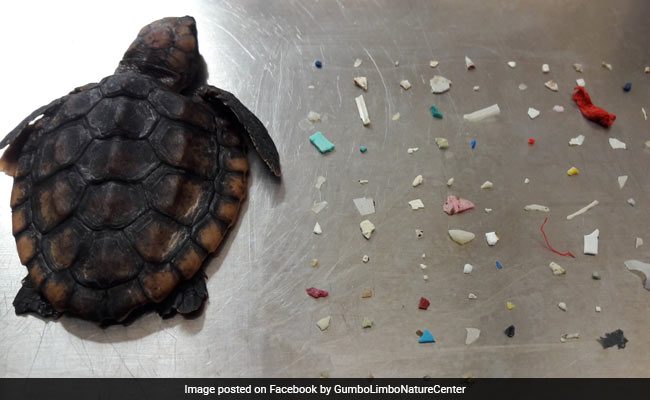 A photograph that is viral online shows a baby turtle next to the plastic it swallowed.

A baby turtle that washed up in Boca Raton, Florida, died shortly after it was found by the Gumbo Limbo Nature Center last week. The loggerhead sea turtle was found with 104 pieces of plastic in its stomach that it ate while swimming in the ocean, reports Today.

A heartbreaking photograph, shared by the Gumbo Limbo Nature Center on Facebook on Tuesday shows the baby turtle, no bigger than the palm of a hand, lying next to the plastic fragments it swallowed. The picture has since gone viral online, collecting a ton of outraged and concerned comments.

According to CNN, the baby turtle was examined by Emily Mirowski, a sea turtle rehabilitation assistant at the center, before it died.

"It was weak and emaciated. I could just tell it wasn't doing well," Ms Mirowski told CNN. A dissection of its stomach after it died revealed 104 pieces of plastic, ranging from bottle caps to balloons. Ms Mirowski explained that having plastic in their belly makes baby turtles think they are full. As a result, they don't eat and don't receive the nutrition they need.

"It was really heartbreaking," she said. "But it's something we've seen for several years and we're just glad people are finally seeing this image and hopefully it's raising awareness."

The incident highlights the toll that plastic pollution takes on the environment and wildlife. According to Gumbo Limbo Nature Center, all of the turtles that died during washback season had plastic in their intestinal tracts. Washback season is when baby turtles that have made it to the ocean are washed back to shore because of heavy winds.

"Unfortunately, not every washback survives. 100% of our washbacks that didn't make it had plastic in their intestinal tracts," the center said.

Each year, thousands of marine turtles die after consuming or becoming entangled in plastic. According to the United Nations, there will be more plastic than fish in the world's oceans by 2050 if current trends of using single-use plastics continue.