"We are deeply saddened by this image," a spokesperson for Starbucks said. 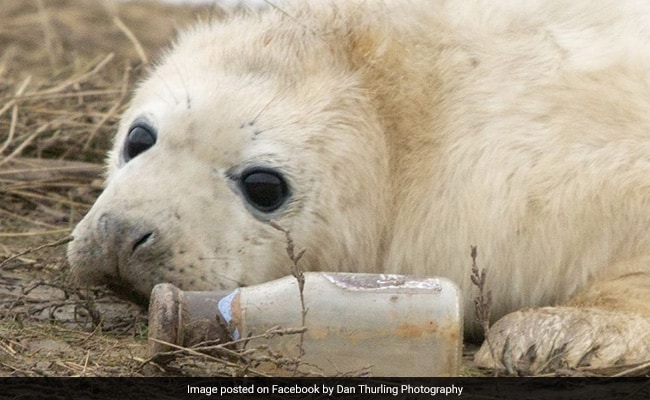 A seal pup was photographed playing with a discarded glass bottle.

Another photograph showing the impact of pollution on marine life has emerged online. The picture, clicked at the Donna Nook Nature Reserve in UK, shows a seal pup playing with a discarded Starbucks bottle. According to Lincolnshire Live, the picture has prompted global coffee chain Starbucks to offer to help Donna Nook tackle its litter problem. The nature reserve is one of the UK's largest breeding colonies of grey seals.

The striking photograph of the seal pup was clicked by nature photographer Dan Thurling, who criticised people for littering.

"I just don't understand why people have to litter. Do we not value this planet and all that we share with it?" said Mr Thurling, 40, according to The Sun. "I imagine the bottle is still there but hopefully, it hasn't harmed these amazing animals."

Mr Thurling also added that the bottle appeared to be glass, not plastic. "I fear had the pup had more strength then it wouldn't have ended well."

After being made aware of the photograph, Starbucks said it contacted Lincolnshire Wildlife Trust to ask how it could help with waste management. "We are deeply saddened by this image," a spokesperson for Starbucks said.

Lincolnshire Wildlife Trust said it was grateful to Starbucks for the support, reports BBC. "Marine litter is a national issue and the wildlife trusts are therefore calling on government to better protect and restore our marine environment, including tackling the major sources," said a spokesperson for the trust.

The trust added that it had also had problems with discarded fishing ropes and toys getting caught around the neck of seals.

This isn't the first photograph to have highlighted the issue of marine pollution. It comes just weeks after a baby turtle in Florida was found with 104 pieces of plastic in its belly. A picture of the dead turtle next to the plastic pieces it swallowed had gone viral online in October. Before that, it was a photograph of a mother bird at a beach feeding her chick a cigarette butt that had generated concern and outrage online.