The pictures have gone viral online 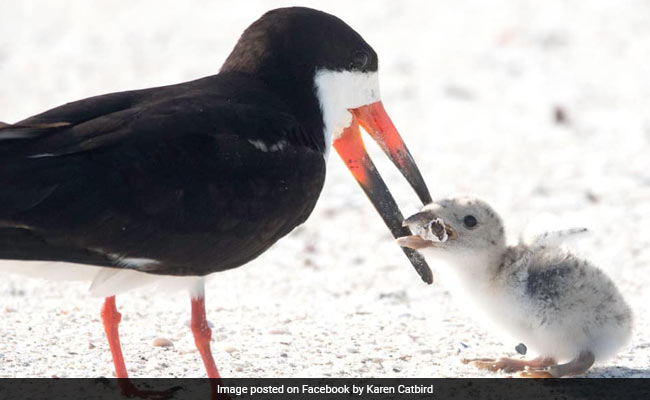 A black skimmer bird feeding its chick a cigarette butt.

A mother bird at a beach in Florida was spotted feeding her baby chick a cigarette butt. The heartbreaking scene was clicked by Largo resident Karen Mason, who shared the pictures on Facebook along with a reminder to beachgoers to clean up after themselves.The pictures were clicked last week at St. Pete's Beach in Pinellas County, according to local reports.

"I happened to see an adult giving a chick something. I knew it wasn't a fish, but I couldn't tell what it was," she said, adding that it was only when she got home and saw the pictures on a computer that she realised it was a cigarette butt.

"If you smoke, please don't leave your butts behind," wrote Ms Mason on Facebook, sharing the picture which shows a black skimmer bird feeding its chick the butt of a cigarette.

Ms Mason also shared another picture of the chick with the cigarette butt. "This Skimmer chick was offered a cigarette butt by its parent. It's time we cleaned up our beaches and stopped treating them like one giant ash tray," she wrote.

The pictures, along with Ms Mason's appeal, have struck a chord with the Internet. Since being shared online on Tuesday, they have gone viral, collecting hundreds of comments and 'shares'.

"Absolutely disheartening to watch," wrote one person on Facebook. "Just sickens me," said another.

Cigarette butts made the top of the 10 trash items most collected from beaches globally, according to a 2018 report from the Ocean Conservancy.