The video shows the artist, who is said to be only 23-year-old, playing melodious tunes on the dombra, a long-necked Kazakh musical instrument. 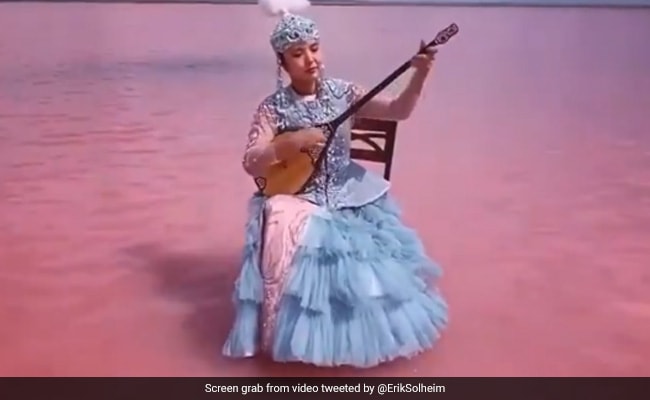 The video has accumulated more than two million views and hundreds of likes.

A video of a Kazakhstan woman playing a musical string instrument against the backdrop of a pick-coloured lake has gone viral on the internet. The clip was shared on Twitter by former Minister of International Development of Norway Erik Solheim.

The one-minute-long video shows the artist, who is said to be only 23-year-old, playing melodious tunes on the dombra, a long-necked Kazakh musical instrument. Mr Solheim captioned the post, "A 23-year-old musician, is playing in Lake Kobeituz, a salt lake in Kazakhstan that turns pink every several years. Fashion, nature, vibes ... beautiful."

The video opens to show the young woman sitting on a chair in the shallow region of the lake holding the instrument. The artist had put up a modern spin on traditional Kazakh clothing and paired a baby blue dress with a version of an ornamental hat called a saukele - a headdress that Kazakh women would wear as brides.

Viral Video | Man Invents "Flamethrower" For His Children To Play With At Home, Internet Stunned

Since being shared, the video has taken the internet by storm. It has accumulated more than two million views and hundreds of likes. Netizens lauded the creativity showcased in the video.

One user wrote, "Sir! Playing music is a Creative Act! And And And in Creativity, Life Change! Beauty being Creative." Another said, "World is so full of beautiful miracles."

"This is blowing my mind," added third, while a fourth wrote, "This is fantastic, heck it looks like it's straight out of fantasy even. I love that this exists where people can touch and experience it somewhere on this planet."

Lake Kobeituz is a body of water located in the Akmolinskaya region of Kazakhstan that turns a shade of pink every few years. It is believed that the presence of a particular type of algae is what gives the lake the pink tint.