Man Invents "Flamethrower" For His Children To Play With At Home, Internet Stunned

Daniel Hashimoto has also released a video with some visual effects added, which shows actual flames coming out of the leaf blower. 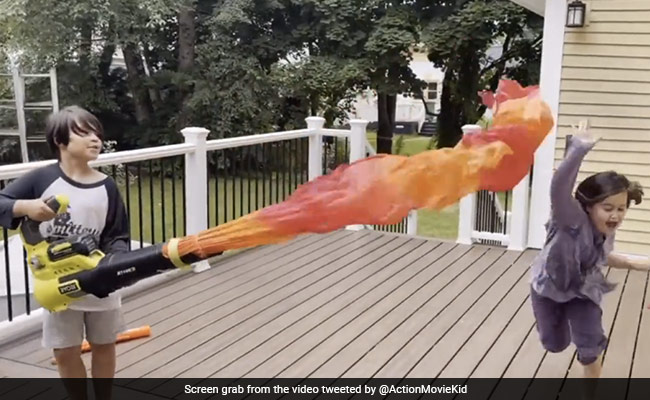 Daniel Hashimoto's children have already declared it "the best toy ever".

A man's invention to keep his children entertained has gone massively viral on social media. Canada-based Daniel Hashimoto, who works in visual effects, created a "toy flamethrower" using a leaf blower and left the internet stunned. Mr Hashimoto posted a video of his kids on his Twitter handle ActionMovieDad playing around in the backyard of the house but it has incinerated the platform's users. Twitter users have expressed concern about exposing children to weapon of this kind.

However, the toy is not exactly a flamethrower - the burst of flame is actually a very harmless blaze of flame-coloured silk fabric.

Did we just build the best toy ever? pic.twitter.com/vej6T9bZNX

His children - 11-year-old James and 7-year-old Sophia - have already declared it "the best toy ever", according to New York Post. The videos on Mr Hashimoto's Twitter handle show the two kids, along with a neighboring friend, laughing and playing with their new toy.

He has also released a video with some visual effects added, which shows actual flames coming out of the leaf blower. Both the videos have been viewed more than six million times, and most of the users are not happy with the invention.

One user said it's "kinda horrific when you think what a real flamethrower can do to a human". Another Twitter user accused Mr Hashimoto of "glorifying "one of the most horrific weapons of war".

Some users, however, saw the fun in the video and defended the visual effects artist.

"Let them be kids," one user tweeted. "There's a fine line between play and commiting a crime. Did none of you have a water gun or snowball fight," said another.

As the buzz around his invention gained traction on Twitter, Mr Hashimoto spoke to Newsweek about it. "My leaf blower was on the patio and James asked if they could use it without the battery as a prop. After a bit, the kids played more with it- launching ping-pong balls out of it like a cannon - and filming slo-mo videos of their hair getting blown back like they were on a motorcycle," he said from his Prince Edward Island home.

The 39-year-old further said he got the idea after coming across one of his wife's play silks which his kids have previously used to build tents and forts with.

He dismissed the criticism around his creation, saying it's important to encourage imaginative play and creative problem solving in children so that the can turn it into being good at improvising, and dealing with challenges.