Scroll down to watch the video. 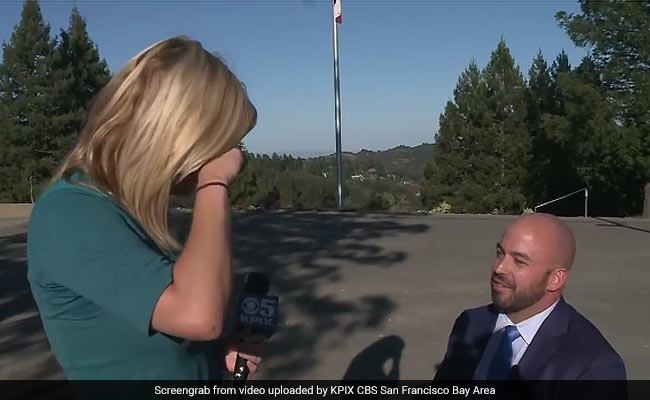 A television journalist had just finished reporting live when she was surprised to see her boyfriend walk towards her, drop down on his knee and ask her to marry him. The sweet on-camera proposal is sure to make you smile.

California-based Emily Turner had just wrapped up a live report for KPIX-TV when she saw her boyfriend, Daniel Bowen, suddenly appear. What was even stranger to her was that he was all dressed up in a suit.

"What are you doing here?" she asked.

Without saying a word, he dropped to one knee and asked her to marry him.

Watch the sweet wedding proposal below:


News anchors in the studio later revealed Mr Bowen had been coordinating with them ahead of the proposal.

The TV channel posted a video of the surprise proposal on their official Facebook page where it has been viewed over two lakh times in two days.

Promoted
Listen to the latest songs, only on JioSaavn.com
"Brought tears of joy to my eyes for you both! Thank you for sharing this on air. Much happiness to you both," commented one viewer.

"Once in a while it's good to witness something amazing out of all these crazy things happening around the world. Congratulations," commented another.Click for more trending news