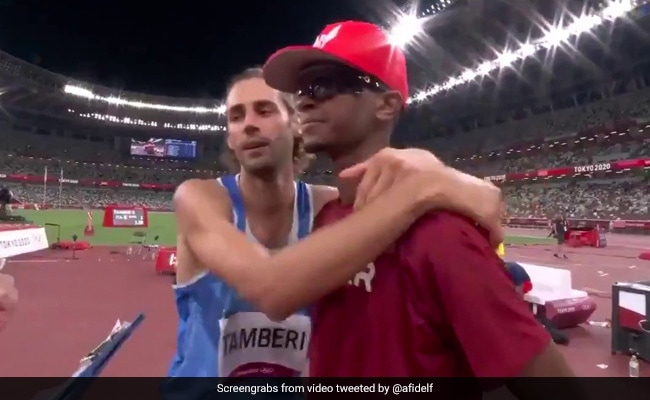 Qatar's Mutaz Barshim added Olympic gold to his world title as he shared the title with Italy's Gianmarco Tamberi in an unusual finish to the men's high jump on Sunday.

Barshim and Tamberi recorded a best clearance of 2.37 metres while Maksim Nedasekau of Belarus also cleared that height to set a national record.

Nedesekau though missed out on a share of the gold due to an earlier failure.

For Barshim, 30, it completes a full house of Olympic medals having taken bronze in London in 2012 and silver in Rio five years ago.

Tamberi added Olympic gold to a world indoor and a European title, both in 2016 and celebrated exuberantly despite the absence of spectators at this pandemic-affected Games.

The long-haired 29-year-old collapsed to the ground and rolled around in ecstasy.

Fave moment of the Olympics so far. Barshim (Qatar) and Tamberi (Italy) were tied in the high-jump final. The official is there talking about a prospective jump-off, but Barshim asks immediately: "Can we have two golds?" One look, no words exchanged, they know they're sharing it. pic.twitter.com/E3SneYFocA

He recovered his composure briefly before launching into more histrionics when his compatriot Lamont Marcell Jacobs stunned the sprinting world by winning the Olympic 100 metres title.

Barshim and Korean Woo Sanghyeok both got over 2.35m at the first attempt -- the Qatari yelling out with joy and beating his chest during an entertaining contest.

Woo's celebration was equally flamboyant as the 2018 Asian Games silver medalist ran over to his coach to slap hands after setting a new national record.

Brandon Starc, brother of Australian cricketer Mitchell Starc, joined them with a clearance of 2.35m  bringing his watching Australian team-mates to their feet including one who had attached a sign to his shirt saying "Brandon Starc's room-mate".

He was alas to go no further.

Nedasekau tried to get the watching athletes and coaches in the stand worked up to create an atmosphere in the 68,000-capacity venue.

It worked a treat for him as he joined Barshim with a first attempt clearance at 2.37m.

Tamberi too cleared it. However, 2.39m became a height too far for the trio of medalists.

Barshim went closest with his third attempt. After knocking off the bar he gave a rueful shake of the head and applauded the onlookers.

With the title at stake as Tamberi jumped last, Barshim still found it within himself to applaud him as he prepared to launch himself at it -- moments later the pair hugged as joint winners.