Watch The Hair-Raising Rescue Of Snake Hiding In Scooter: "Never Ever Try This" 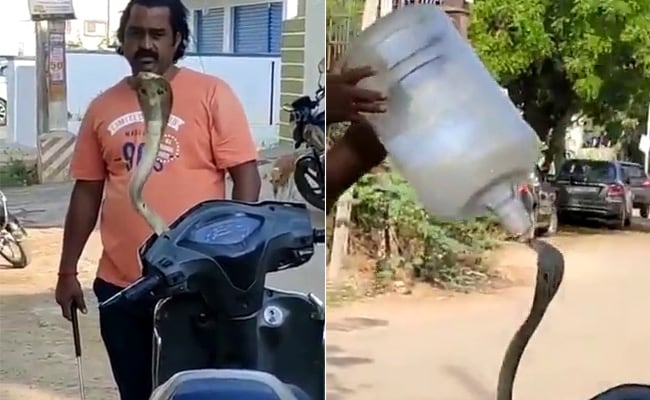 A snake found hiding inside a scooter was rescued with the help of a plastic container.

A hair-raising video shows the moment a snake emerged from inside a scooter and the novel method used to rescue it. The video shows the snake - which some on Twitter identified as a cobra - raising its head from inside the scooter as several people filmed the scene on their mobile phones. It goes on to show a man using a large water container to capture the reptile.

The video was shared on Twitter yesterday by Indian Forest Service officer Susanta Nanda, although it has been doing the rounds of the Internet for at least a year. The license plate on the scooter indicates that the incident took place in Telangana.

In the two minute and seven seconds-long clip, the snake raises its hood in a defensive display while emerging from the scooter. It strikes at the snake catcher trying to approach it, who steps back quickly to avoid getting bitten. The man approaches the snake again, carrying a large water bottle with a narrow neck. This time, he manages to coax the snake into the bottle after trying a few times. Once the snake is fully inside, he puts a lid on the bottle to keep it from escaping.

"Such guests during rains are common...But uncommon is the method used to rescue it," wrote Mr Nanda while sharing the clip on Twitter. "Never ever try this," he warned his followers.

Such guests during rains are common...
But uncommon is the method used to rescue it. Never ever try this???? pic.twitter.com/zS4h5tDBe8

The video has been viewed nearly 15,000 times on the microblogging platform. While some criticised the snake rescuer's handling of the serpent, one Twitter user identified him as an expert who has rescued thousands of snakes in a similar manner.

I personally know the rescuer. He is my super super senior at Friends of snakes society and he knows exactly what he is doing. He had rescued thousands of snakes. Not to be tried by untrained persons.

Wow scary and skilfully done though !!

Others wondered what happened to the snake afterwards

There must be holes in that bottle that are enough for the snake to get enough air and it cant escape through!

Snake rescuers often leave us stunned with the ease with which they capture potentially-dangerous serpents, but even seasoned snake catchers have a few unpleasant surprises at times. Recently, one in Karnataka narrowly avoided getting attacked by a hostile king cobra in a video that has now gone viral online.