Watch: Snake Appears In Water As Man Feeds Fish. His Reaction Has People In Splits

"Rattlesnakes can swim btw," the man wrote while sharing the clip. 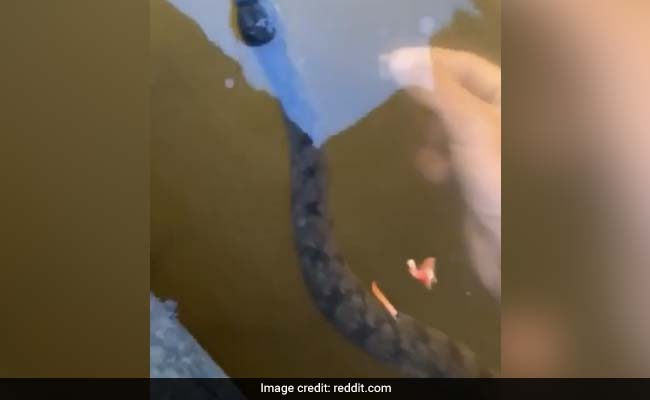 A Reddit user was horrified to see a snake swim up next to his hand.

While many people would not put their hands directly in murky water to feed fish, this man did just that - and nearly paid for his mistake too. A video that has people in stitches shows a man feeding fish when a snake swims up right next to his hand in water, sending him running for his life.

The video is being widely circulated on Reddit where it was shared three days ago by user "fevertheme".

In the 16-second clip, the man is seen putting his hand directly in murky water to feed a school of fish. While things seem to be going well initially, with fish swimming right up to his hand, they take a turn for the hilarious when a snake appears in the water too. The video shows the reptile swimming up right next to the man's hand, who does not seem to notice it at first. When he does, however, realise that there is a possibly venomous snake dangerously close to his hand, the man quickly abandons the feeding session to flee the scene.

"Rattlesnakes can swim btw," the man wrote while sharing the clip. Take a look at it below:

Rattlesnakes can swim btw from r/WTF

Since being shared on Reddit three days ago, the video has collected over 44,000 'upvotes' and hundreds of amused comments.

While many debated the kind of snake it was - arguing that it did not look like a venomous rattlesnake - others had a good laugh over the man's "slow reflexes" in noticing the serpent and running away.

"I thought at first he was trying to remain still on purpose, but I suppose not," wrote one person.

"That's a water snake, not a rattler," another remarked.

"Ran like the thing was going to jump out and transport him into the 4th dimension," a Reddit user commented.