Watch: Shraddha Arya And Her Friends Had This Much Fun While Waiting For The Baraat

In the clip, Shraddha Arya and her girl gang give their own twist to the popular dance 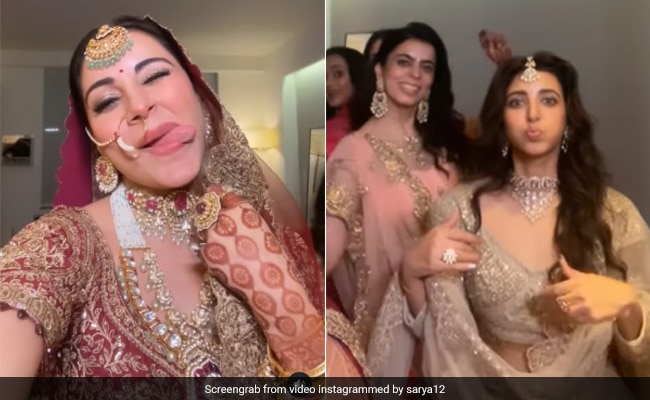 Kundali Bhagya actress Shraddha Arya, who got married last week, has shared a glimpse of the fun that she and her friends had while they waited for the groom and his baraat to arrive. The actress, who married Delhi-based naval officer Rahul Nagal last Tuesday, has been sharing photos and videos from the wedding festivities on Instagram. Her latest video shows the 34-year-old actress lip-syncing to the 2008 Miley Cyrus song He Could Be The One, which has seen a resurgence of sorts on TikTok and Instagram Reels.

In the clip, Shraddha Arya and her girl gang give their own twist to the popular dance trend in which one person lip-syncs to the lyrics, while others perform weird and often hilarious dance steps in the background. Dressed in their festive best, the bride and her bridesmaids nailed their performance.

"Wedding Day shenanigans, while my friends and I waited in the room for the Baraat that ran a bit behind schedule," Shraddha Arya wrote while sharing the video.

The Instagram Reels video has racked up over 3 lakh views within an hour of being posted, along with over 60,000 'likes'.

"Always wanted you to do this trend," wrote one fan in the comments section.

"The coolest and the most chilled out bride award goes to Shraddha Arya," another said.

The actress had introduced her husband to her Instafam last Wednesday, sharing a picture from their wedding captioned "#JustMarried".

This was followed by a photo from their reception, for which Shraddha Arya dressed in a grey saree. "Commander and Mrs Nagal," she captioned the photograph.

Shraddha Arya is best-known for playing the role of Preeta Karan Luthra on the popular TV show Kundali Bhagya. She also starred in the Hindi film Nishabd, which had Amitabh Bachchan and late actress Jia Khan in the lead.