Watch: Politician Sneaks Out Of Zoom Meeting After Placing Pic On Camera

Valentina Batres Guadarrama of Mexico stepped away in the middle of a Zoom meeting. 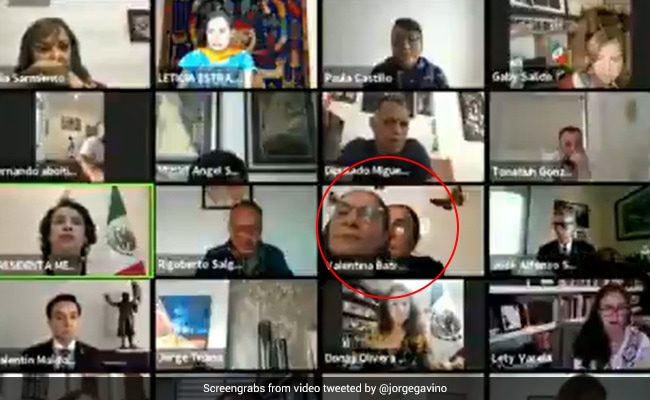 A politician was filmed stepping away from a Zoom meeting and using her pic to fake attendance.

A politician in Mexico has been accused of using a photograph to fake her attendance during a Zoom meeting. Mexico City congresswoman Valentina Batres Guadarrama was caught on camera sneaking out of the meeting after using a photo of herself to pretend like she was still there. According to Mexico News Daily, Ms Guadarrama of Morena party had been attending a virtual session of Congress on Friday when she appeared to exit the call.

Unfortunately for her, the exit was not very well executed. Ms Guadarrama was filmed clearly leaving her seat and using Zoom's background function - set to a picture of herself - to pretend like she was still there. To make matters worse, her arm could be seen intermittently jutting into the frame, even as her colleagues stared in shock and amusement at the picture that replaced her.

According to Ladbible, the Zoom meeting was recorded and Jorge Gavino, deputy of the local Democratic Revolution Party, shared the footage on Twitter with a biting caption. "I was thinking you were paying a lot of attention to my speech, until I realised that your attentive look was a photograph," he wrote.

The video has garnered over 63,000 views and a ton of reactions, with many criticising Ms Guadarrama.

For her part, Ms Guadarrama has denied any breach of protocol or accusations of inattentiveness. "My lack of knowledge of digital tools made me make a mistake. I put up a wallpaper that showed my frozen image. I stopped for a second to request technical help at home," she said in a statement posted on social media Tuesday.

"If you can see in the full video you can see that during the session I appear moving and making various gestures and movements," she added.

This is not the first time that a goof-up on Zoom has gone viral on social media. In May, a businessman accidentally appeared naked during a Zoom conference call with Brazil President Jair Bolsonaro.