"Unfortunately we saw. It was a shaky picture but we saw," said Brazil President Jair Bolsonaro. 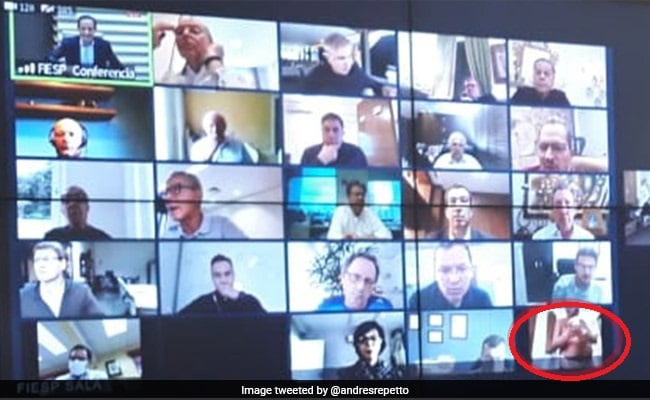 A businessman accidentally appeared naked during a Zoom conference call with Brazil President Jair Bolsonaro - the latest in a long line of 'working from home' mishaps that have gone viral on social media. The businessman apparently forgot to turn his camera off while taking a shower during the video call.

According to the Daily Mail, the slip-up occurred during a virtual meeting organised by Paulo Skaf, the president of the Federation of Industries of the State of Sao Paulo.

A screengrab from the Zoom meeting, which was attended by several other officials and businessmen, shows the man without his shirt. It is being widely circulated on social media, where it has left many amused.

The president interrupted Mr Skaf after spotting the naked businessman on his screen, reports The Sun. "Paulo, there's a colleague there in the last little square, he left, is he OK?" Mr Bolsonaro said.

The Minister of Industry, Paulo Guedes then said: "There is a guy having a shower there, naked."

Mr Bolsonaro is said to have responded with: "Unfortunately we saw. It was a shaky picture but we saw."

The man has not been identified publicly.

With millions confined to their homes during the ongoing coronavirus pandemic, video calling and virtual meetings have increased significantly - and this is not the first embarrassing 'work from home' blunder that has left social media users in splits. In April, an ABC News reporter was caught without his pants during a broadcast from home. After that, a toilet flush heard during the US Supreme Court's teleconference experiment made news around the world.