Watch: Man Tells Groom About Gatecrashing His Wedding. This Happens Next

IAS officer Awanish Sharan shared the video in which the hostel boy was seen confessing to the groom that he didn't know his name and entered the venue just to eat some free food. 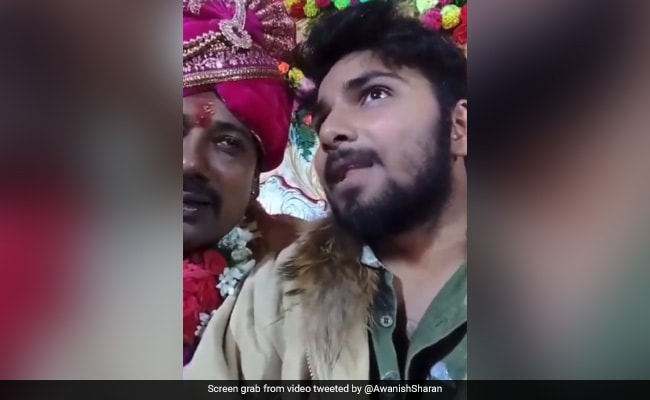 A video of a student who gatecrashed a wedding and took to the stage to have a confession dialogue with the groom is winning hearts on the internet. Taking to Twitter, Indian Administrative Service (IAS) officer Awanish Sharan shared the video in which the hostel boy was seen confessing to the groom that he didn't know his name and entered the venue just to eat some free food.

In the clip, while speaking in Hindi, the boy said, "I stay in a hostel and I was hungry. So, I came here to eat." He further politely asked the groom if he was okay with him grabbing some food from his marriage. Upon listening to his honest confession, the groom immediately responded by saying that he could definitely do so. He even happily asked the student to pack some food for his friends at the hostel.

Now, the internet is in love with the groom's hospitality and the student's honesty. In the comment section of the post, while users simply called the video "heartwarming," others applauded the groom and his welcoming gesture.

"That's a real homie conversation," wrote one user. "What a good man," said another. A third commented, "That's the power of 'hum'...Its an emotion of belongingness." A fourth added, "That's why I love Indian culture so much!"

Mr Sharan shared the video on Thursday and since then it has accumulated more than 125,000 views and over 11,000 likes.

Meanwhile, speaking of weddings, a while back a picture showing a groom sitting at the mandap and working on a laptop had gone viral on social media. The photo was shared by an Instagram handle named 'Calcutta Instagrammers' which showed a Kolkata groom seated in the mandap, along with two priests. As the priests performed the rituals and blessed the groom, he was seen engrossed in his work on the laptop.