Kolkata Groom Seen Working On Laptop During Wedding, Internet Is Not Happy

As the priests perform the rituals and bless the groom, he can be seen engrossed in his work on the laptop. 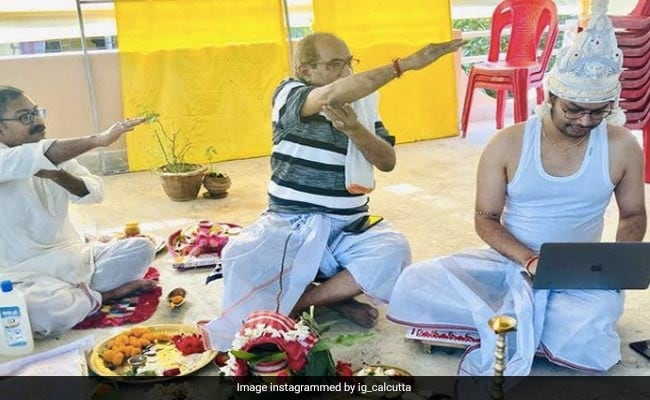 Since 2020, the concept of ‘'work from home'' has become an integral and normal part of everyone's lives, because of the global pandemic. People have become used to logging in at odd hours to complete office tasks. But one groom took things a bit too far as he was spotted working on his laptop on the day of his wedding. A picture that has gone viral online shows the groom sitting at the mandap and working on a laptop, oblivious to what is happening around him.

The photo was shared by an Instagram handle named ‘Calcutta Instagrammers' which shows a Kolkata groom seated in the mandap, along with two priests. As the priests perform the rituals and bless the groom, he can be seen engrossed in his work on the laptop. Though it is not clear what exactly was he working on his laptop, it has been assumed that it was some official work.

The photo was captioned, “When "work from home" stretches you to the next level. TAG A FRIEND who might be seen doing this during their wedding.''

While a few laughed this off, a majority of social media users criticized the toxic work environment that does not let a person even enjoy his own wedding.

One user wrote, “I don't find this funny. No organisation asks an employee to work on their wedding days, this person needs to get a life and learn work life balance if this is really true and not staged! God bless the woman he's marrying.''

This is not the first incident where such a situation has occurred. Last year, a picture of a groom working on his wedding night had been turned into a hugely popular meme on social media.