The chilling video, filmed in Gujarat, shows the man running away in the nick of time 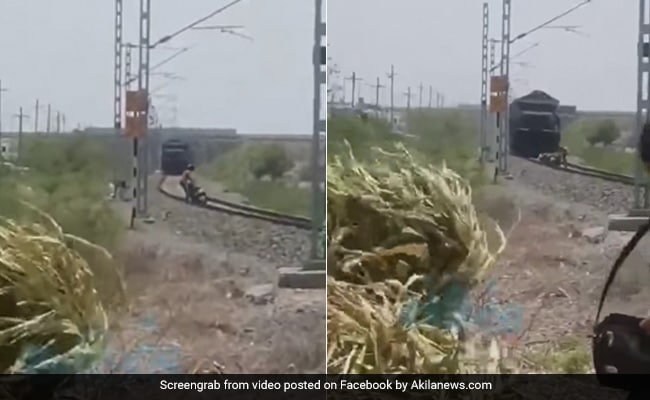 Viral footage shows a man trying to drag his scooter away from the path of an oncoming train.

Hair-raising footage that has been widely circulated online shows a man desperately trying to drag his two-wheeler away from the railway tracks in which it had become stuck, even as tried to signal an oncoming train to stop for him. The chilling video, filmed in Gujarat, shows the man running away in the nick of time as the train dragged his scooter with it for a few seconds before finally coming to a halt. The footage has gone viral on social media, where many criticised the man's behaviour as foolish and reckless.

The incident took place at Sandhiya Bridge in Jamnagar, reports TV9. The train was speeding on the railway track passing through the Hariya College area when it encountered the stranded scooterist.

According to several media reports, the man had been doing stunts on the railway tracks when he noticed the approaching train. The scooterist tried to move his vehicle out of the train's way but quickly realised it had become stuck. He raised his hand to signal the train driver to stop, but that, of course, proved to be an exercise in futility.

Videos shared on social media show the train dragging his Activa scooter along for a few seconds after the man managed to sprint away at the very last second, avoiding a serious accident.

According to News 24, local police has been searching for the man since the video emerged on social media a few days ago and quickly went viral.

This incident is just another in a long line of dangerous stunt videos that have attracted criticism from authorities as well as the general public. Earlier this year, a 16-year-old boy was burnt to death after coming in contact with high-tension overhead wires while taking photos atop a goods train in Jharkhand's Ramgarh district.

Can You See The Crocodile Hiding In Plain Sight In This Video?