The little girl makes every effort to be as precise and as agile as the three-time Olympic gold medallist. 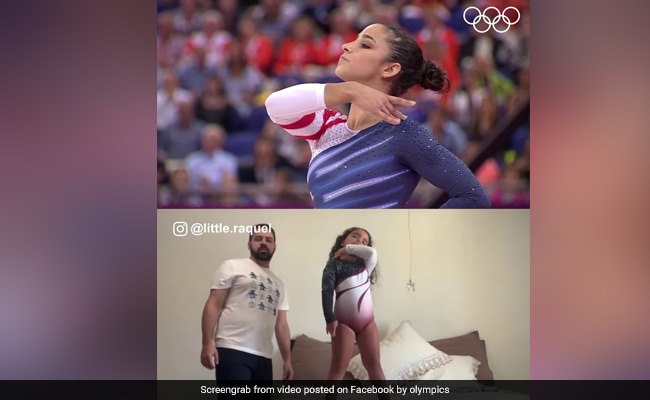 A girl imitates Aly Raisman's routine at home, assisted by her father.

The Olympics fever has peaked in the country with some sound performances, including by its players lately. Though some did not turn into medals, the players have been appreciated widely. The Olympics Committee, too, has ensured that people get inspired by these players who put in every effort for four years to make their country proud. The Committee has shared a video of a little girl trying to match the agility of American gymnast Aly Raisman at her home. Assisted by her father, she tries to imitate the six-time Olympic medalist, does somersaults and stretches her body on her bed.

“It's the Olympics. Who's inspired from home?” the committee captioned the post.

The 1.45-second video is a treat to watch. The girl, named Raquel, appears so drawn into the sport by Raisman that she wears a matching leotard. She makes every effort to be as precise and as agile as the three-time Olympic gold medallist, whose performance she watched on TV.

Aly Raisman's Olympic gold in London (2012) and Rio de Janeiro (2016) inspired a new generation of gymnasts to pursue their dreams. She is not competing in the Tokyo Olympics. She announced her retirement from the sport in 2020.

The video has received wide appreciation from social media users, a number of whom praised the girl and her father.

“OMG. This is the cutest little gymnast and a gold medal to her dad for his beautiful encouragement,” said a user named Sarah Ryan.

Another, James Maria MacDonald, wrote, “This is what our athlete's legacy is. Inspiring the youngsters out there. And, what a fabulous dad. Gold medal to him”.

This user, Sean Manning, said he watches the Games “because it gives the beauty to inspire others to strive for greatness from within themselves”.

“For a moment I was like, what's the dad standing there for, and then I realised. Amazing father he is,” read a comment by Edidiong Abasi.

Though the video is an old one, more than 8,000 people have shared it on Facebook. When it was earlier doing the rounds on the Internet, even Raisman had noticed it and said, “I have to meet this girl”.

Even has the matching leotard! I have to meet this girl ❤️❤️❤️ https://t.co/InxtwRVZia

The original video has got more than 1.1 million views on Twitter.