A local shared the video of the snake on Twitter. 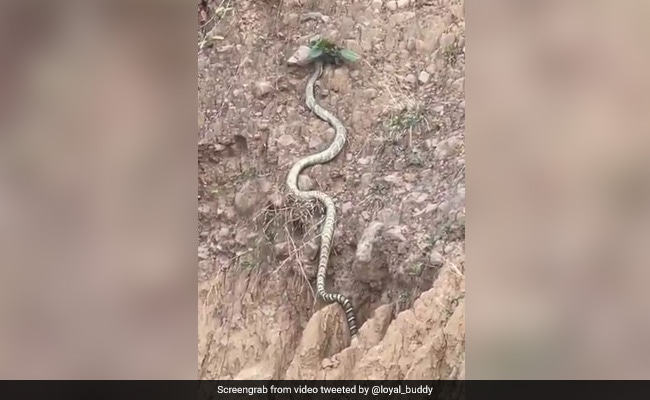 A King Cobra was spotted in Himachal Pradesh.

If you need to know something about anything, there is probably someone on the Internet who can tell you. This is what a resident of Himachal Pradesh had in mind when he shared a clip of a snake that he had sighted during one of his walks. The man, Praveen Singh, had clicked a few pictures and videos of the snake and wanted to identify the reptile. In addition to sharing the images with the forest and wildlife department in Paonta Sahib, he also shared the content on social media and tagged an Indian Forest Service officer asking for help with identification.

Mr Singh had chanced upon the snake after his pet dog alerted him to its presence and proceeded to record it slithering out of a deep hole in the rock. Little did Mr Singh know then that his video was the first documentation of a King Cobra sighting in the entire state.

Sharing the video on Twitter, he tagged the IFS officer and wrote, “Parveen Kaswan Ji, which snake is this? Thanks to my pet Blackie.. alerted me for the snake during the walk this morning ..!”

@ParveenKaswan Ji, which Snake ???? is this?.
Thnx to my pet Blackie.. alerted me for the snake during the walk this morning ..! pic.twitter.com/SmHn7kUnn7

Soon, the video made the rounds on social media and messaging platforms, and reached wildlife experts and forest department personnel. After careful examination, it was confirmed that the snake sighted in the video was a King Cobra, which had previously not been sighted in Himachal Pradesh. The world's longest venomous snake is native to large parts of South-East Asia. In India, King Cobra is predominantly found along the Western Ghats region, as well as regions in Assam, Bengal, Odisha and Terai areas.

Explaining that this is perhaps the first authentic record of King Cobra in Himachal Pradesh, Divisional Forest Officer Kunal Angrish said that the reptile's previous range in north India ended in Uttarakhand. Speaking to Indian Express, he said, “A local resident Parveen Singh had clicked the picture of this venomous snake, presuming it to be an ordinary snake that was extraordinarily long. But as he shared the picture on groups, someone forwarded it to our forest department personnel and wildlife wing. We checked and found that it was a King Cobra. We have got in touch with Parveen Singh and are checking the area, which is in the Kolar forests of Paonta Sahib.”

Several users replied to the video on Twitter and used words like “beautiful” and “amazing” to describe the reptile. Take a look at some of the reactions.

Such a majestic animal...

The King Cobra tends to avoid confrontation with humans, though it can be extremely dangerous when provoked or in a state of fear. In addition to being highly venomous, it also has a large range that makes it tough to evade its attack.

Much Ado About Kamala Harris Handing Out Cookies Styled After Her