The elephant fell into a well at the Malai Mahadeshwara Wildlife Sanctuary. 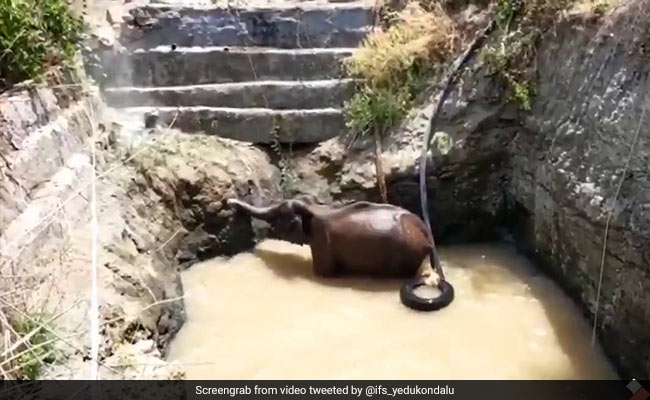 An elephant was rescued from an agricultural well.

A JCB excavator was brought in to rescue an elephant that fell into an agricultural well in Karnataka. On Thursday, Indian Forest Services officer Yedukondalu V took to Twitter to share a video of a male elephant that fell into a well at the Malai Mahadeshwara Wildlife Sanctuary. The video shows the jumbo struggling to get out of water but unable to do so because of the four walls of the well. A crowd of curious spectators is also seen gathering around the well to catch a glimpse of the elephant.

The video shows how the rescue operation was facilitated with the help of a JCB excavator, which dug a ramp for the huge animal to use. It ends with the elephant climbing out and hitting the excavator - a move that the IFS officer described as "natural behaviour of defence" in the comments section.

"Rescued the male elephant fallen into agricultural well in Hoogyam,MM Hills Wildlife Sanctuary. Thanks to villagers, police, media and forest frontline staff for cooperating," he wrote while sharing the 36-second-long video.

The elephant rescue has been viewed nearly 4,000 times since it was shared on the microblogging platform. In the comments section, many thanked the Forest Department for rescuing the distressed elephant.

yeah ...it's natural behaviour of defence

Recently, another elephant rescue with the help of an excavator had captured the Internet's attention. The tusker was able to successfully climb out of a 15-foot ditch following an hours-long operation where a JCB excavator was used to create a dirt ramp for it to use.