Following the incident, the zoo gave a reward to the elephant and the worker that jumped in after the antelope. 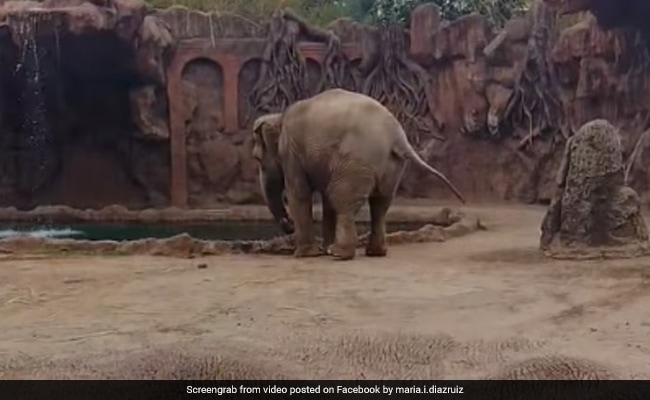 The elephant was given watermelon, carrots and peanuts as a reward.

In an incredible moment, a vigilant elephant called for help when it saw an antelope drowning at a zoo in Guatemala.

According to a video shared by zoo visitor Maria Diaz, the Asian elephant sounded the alarm with a bellowing trumpet as soon as she spotted the antelope in trouble at La Aurora Zoo in Guatemala City. The agitated elephant can be seen calling out and swinging her trunk in the direction of the struggling antelope. The Tusker's noises caught the attention of the zookeeper, who then ran towards the water and jumped in before hauling the frightened antelope to safety.

In the clip, one can see the antelope's horns at the top of the pool, as it struggles to stay afloat. The elephant, on the other hand, appears to point its trunk towards the animal and then turns back to the zookeeper. While the elephant continues to look around for help, the antelope begins to splash more frantically in the water.

The zookeeper then rushes over to the pool and dives into it, while the elephant continues to trumpet. In the end, the zookeeper lifts the antelope high enough that it bounds up over the ledge of the pool.

“Bravo,” a woman is heard in the clip as the antelope hops away while onlookers applaud.

Citing local media outlet guatemala.com, Newsweek reported that following the incident, the zoo gave a reward to the elephant and the worker that jumped in after the antelope. The tusker, who is called “Trompita”, was given watermelon, carrots and peanuts. The zoo worker, on the other hand, was given a certificate.

Meanwhile, according to the media outlet, elephants are highly empathetic animals, capable of complex emotions. A study also found that Asian elephants in particular have shown empathy to other distressed and have also been known to alert humans to situations before.