Since Sunday, US Coast Guard crews have rescued more than 4,200 people affected by Tropical Storm Harvey. 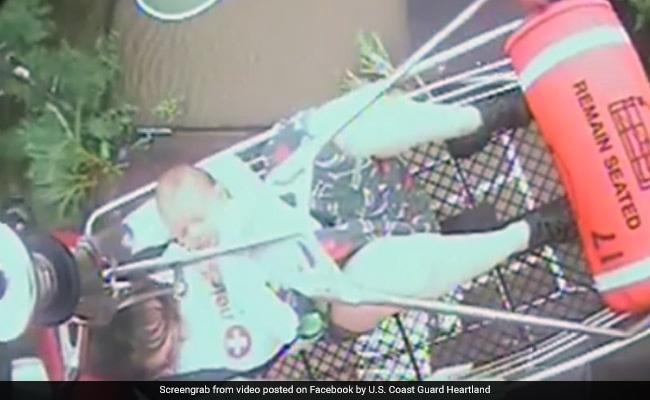 Caught on camera: How a mother and child stranded by Tropical Storm Harvey's flood waters were rescued

A dramatic video posted by the United States Coast Guard on Facebook shows how a young mother and her child were rescued from rising flood waters in storm-battered Texas. Tropical Storm Harvey battered the state as a monster Category Four hurricane, turning roads to rivers and emergency crews are still racing to reach hundreds of stranded people in a massive round-the-clock rescue operation.

The video posted on Facebook about three hours before writing this shows the woman clinging to her baby as both are hauled up to safety by the Coast Guard into a helicopter. Beneath them, their flooded home with people - perhaps other family members waiting to be rescued - standing patiently on the rooftop. A number of cars can barely be seen - they're nearly fully submerged in the rising waters.

Watch the dramatic rescue below:


"Thank you for all that you do to risk your own life for others. This poor family. Prayers for everyone!" comments one person on the video. "I hope that baby grows up to be a Coast Guard pilot, AST, or flight mechanic," comments another.

Since Sunday, Coast Guard crews have rescued more than 4,200 people affected by the storm.

The Coast Guard, which is part of the US Department of Homeland Security, has almost 2,000 personnel working in the round-the-clock rescue operation. Click for more trending news