The video, shot by residents across the street, showed the man almost 30 metres above the ground trying to get hold of the child with one hand and holding on to the drainpipe with the other. 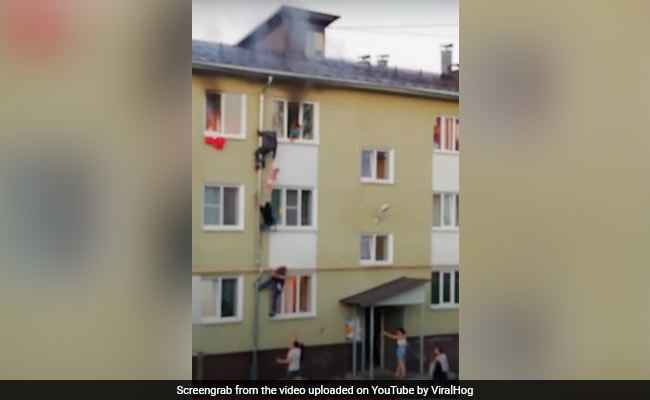 Several people showed extraordinary courage to climb up a drain pipe outside a building to form a human chain to save two children trapped in a fire on the third floor. A video of the dramatic rescue effort from Kostroma, Russia has gone viral. Visuals show a man holding the pipe with one hand and stretching the other to the child trying to escape through the window, just a metre away from the man. Thick smoke was billowing out of the window as the fire continued to ravage the residence.

The video, shot by residents across the street, showed the man almost 30 metres above the ground trying to get hold of the child with one hand and holding on to the drainpipe with the other. Once he gets hold of the child, he passes him/her to the person right below him clinging to the pipe in the same manner. The second person then passes the child to the third and then the child is handed to a woman on the ground.

The local residents rescued the second child from the third-floor residence similarly. The description of the video said the incident happened in the western Russian city of Kostroma, which houses a famous firefighting museum.

Later, fire extinguishers arrived and doused the fire. The men who saved the children have been nominated for bravery awards for their heroic efforts.

The video has got more than 6,000 views and many comments praising the men.

“This is what men do! These guys are heroes. Sure, the kids are terrified of dangling but better than smoked out or burned alive,” said a YouTube user named Armann.

“That was a great moment, but didn't get to see it, well, because that woman was trying to hide the camera like anyone would care that she's recording,” said “Pink”.

Dexter 12X wondered in the comments how the drain pipe was “so strong”, adding it could have “broken down easily, killing all three”.

“I not sure what everyone is talking about. I for one was very interested in the grass, the playground, and of course the window frame. The start was awesome though - brave lads and little ones,” said Robert Chin.