Caught On Camera: Lightning Bolt Strikes 500 Foot Away From US Family

A lightning video going viral on social media shows massive bolts of lightning, one of which strikes and burns a tree. 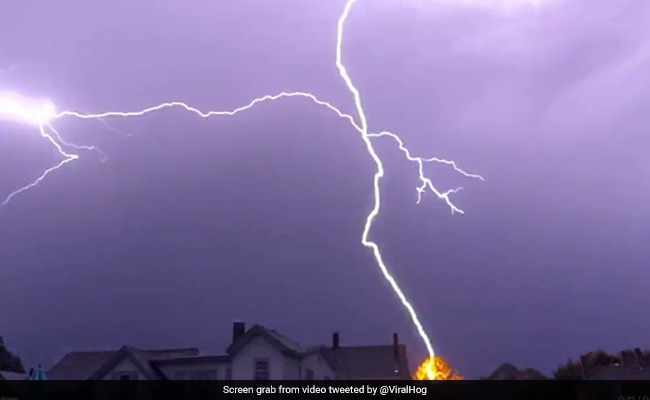 The incident took place in Danvers, Massachusetts, in the United States on June 29.

Thunder and lightning are exciting to watch, but it is very risky to stand in the open when the weather is bad. There is a risk of lightning strike, which can be dangerous. A lightning video going viral on social media shows massive bolts of lightning, one of which strikes and burns a tree. People can be heard excitedly screaming while watching the phenomenon.

Lightning is so cool! ????????????#viralhog#lightning#news#weatherpic.twitter.com/atSF5syZIv

The video of the lighting strike has been shared on Twitter by ViralHog, which said that it took place in Danvers, Massachusetts, in the United States on June 29.

"Lightning is so cool," reads the caption.

According to the description of the video, the man who shot the video told ViralHog that his family was watching an approaching thunderstorm late in the evening on June 29. The man was casually recording the storm and never expected to capture anything so dramatic.

He further said that the lightning bolt hit 500 foot away, passing through a tree and started a fire.

According to National Geographic, lightning is a discharge of electricity created by imbalances between storm clouds and the earth or inside the clouds themselves. The majority of lightning strikes within the clouds.

A flash of lightning may heat the air surrounding it to temperatures five times hotter than the surface of the sun. This heat causes the surrounding air to rapidly expand and vibrate, resulting in the pealing thunder we hear just after witnessing a lightning strike.

The video has received over 20,000 likes so far, since it has been shared.

Lightning strikes during thunderstorms kill more Americans each year than either tornadoes or hurricanes, according to National Geographic.