A video is gaining traction on the Internet, which shows a mother deer visiting a house with its family. It has been posted on YouTube by ViralHog. 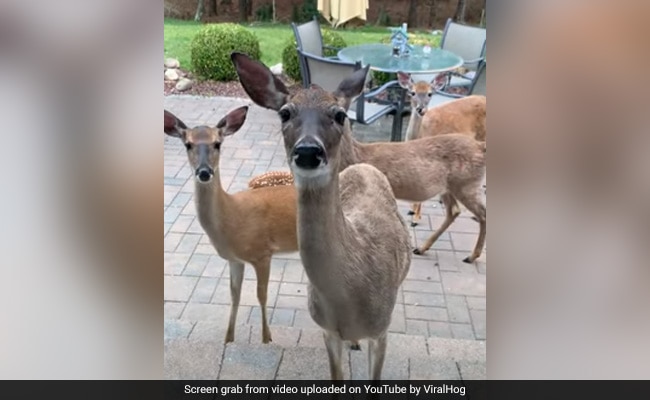 The video has been shot in New Jersey, United States

A video is gaining traction on the Internet, which shows a mother deer visiting a house with its family. It has been posted on YouTube by ViralHog and describes it as a gesture from the mother deer to show her kids to the people living in the house.

According to ViralHog, the video has been shot in New Jersey, United States.

Two women living in the house are heard having a conversation and one of them says, "Clarice, You are using your babies to try to get cookies from me? Not Cool." The woman is calling the mother deer, Clarice.

As the video progresses, the woman poses a question to mother deer. "You're using someone else's baby to try to get cookies? Whose baby is that?" she asks, pointing the camera side to the infant deer. The woman soon realises that it's the deer's baby when the mother deer starts licking the infant deer.

The woman also calls a male deer 'Forest' and says that the brother should be nice to the baby deer. The fawn is seen running away to the forest alone, that leaves the woman scared and she asks, "Forest, what did you say to her?"

The viral video has received over 4,769 views and 268 likes since it has been shared.

"What a lovely deer family, hope they got a cookie in the end," a user wrote in the comment section.

Another wrote something on behalf of Clarice: "Look human give me the damn cookies. You'll be sorry I'll bring my friend. Hannibal to talk to you. Your dearest friend Clarice."

A video went viral last month where a deer was seen calmly waiting for traffic to stop before crossing the road. After a short delay in traffic, the animal finally crosses the road at the zebra crossing.

The video was shared by the Uttar Pradesh Police on Twitter to highlight the significance of obeying to traffic laws.