Watch: Dog Demanding Attention While Human Works From Home Will Melt Your Heart

The video has amassed more than 1 million views on the social media platform. 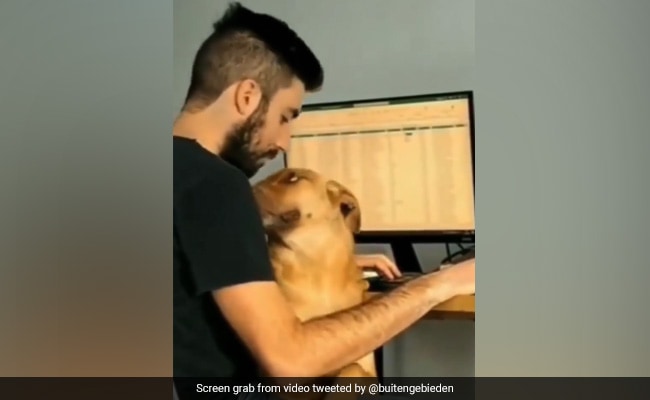 The video was shared on Twitter by user Buitengebieden

There are several videos on the internet which perfectly captures the sweet bond of love between dogs and human. Now, a video of a dog asking its human for attention is going viral on the internet. The video will definitely make you say aww, that too multiple times.

In the video, a man is busy working on his computer when the dog climbs onto his lap and kept staring at his human with puppy eyes. When the man looks at the pooch, he plants a kiss and the dog hugs its human.

Posted by Buitengebieden on Twitter, the video is receiving a lot of love on the internet. Along with the 13-second clip, the caption read, "Working from home."

The video has amassed more than 1 million views on the social media platform. A user wrote, "Hooman, I'm tired. Carry me- The pupper." Another user wrote, "Without dogs, the world would literally stop spinning."

"You wouldn't want to go back to the office ever again," the third user wrote. "No one will ever love you as much as your dog...and they are so unconditionally faithful. Pity how some people treat them, and other animals, they just don't deserve to have them," the fourth expressed.

Meanwhile, in another viral video, a dog was seen jumping excitedly as a woman was seen pouring his food onto a dog plate. It gets funnier because the dog keeps on jumping, which makes the woman smile. A few seconds later another dog arrives and sits patiently for food. The person recording the video shows the stark contrast between the two dogs. The dog, who is jumping, doesn't stop even for a bit.

The video was shared on Twitter by user Buitengebieden on November 27 and since then has amassed three million views and over a lakh likes.