"This was amazing to watch as it was so human like, she washed behind her ears and her feet." 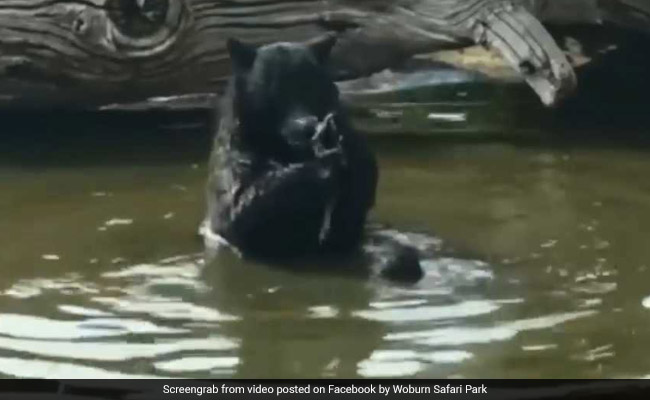 Indiana, a bear at the Woburn Safari Park, has gone viral for 'washing' her face with a cloth.

A bear delighted visitors at a safari park when she pulled out a piece of cloth while in water and proceeded to 'wash' her face with it. The incident occurred at the Woburn Safari Park in Bedfordshire, UK.

The North American black bear, named Indiana, got hold of a piece of the material lining the pond and used it to wash herself, reports the Independent. The water-loving bear then used it to clean herself thoroughly, delighting onlookers.

Kate Dennis, a visitor who witnessed the moment, was quoted as saying: "This was amazing to watch as it was so human like, she washed behind her ears and her feet.

"She then got distracted by a crow and off she went."

Kate describes the sighting as the highlight of her trip.

Indiana is one of the six bears that live at the Woburn Safari Park. Craig Lancaster, an employee of the park, calls her small but "feisty".

"Indiana is our smallest bear but she is also very feisty. She can often be seen sparring and play fighting with the much bigger male bears and is more than a match for them."