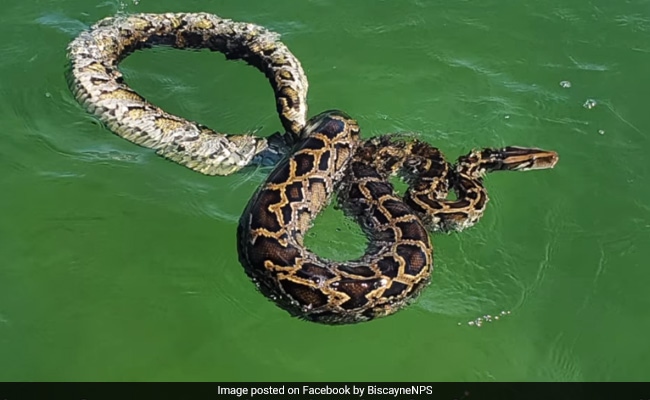 A Burmese python was found swimming off the coast of Florida.

Biologists in Florida have caught a huge Burmese python that was found swimming off the coast of Biscayne Bay. Biscayne National Park posted a video to Facebook that shows how the snake was captured using a net. The python was found one mile or approximately 1.6 kilometres off the coast on Tuesday.

Once on dry land, biologists who netted the snake found it to be a whopping 11 feet long. The Burmese python weighs around 14 kilograms.

Watch how it was captured by biologists after being spotted:

The video has collected over 23,000 views and a number of comments from people marvelling at the swimming snake. "Unbelievable," wrote one person, while another said "Nice catch!"

In its Facebook post, Biscayne National Park said that the invasive snakes are not found in the Biscayne Bay area too often, but they are not unheard of either. "While these snakes are relatively uncommon here in Biscayne, we do remain vigilant so we can respond and remove this invasive species when we see them," they wrote, asking people to report sightings of pythons.

According to the Miami Herald, Burmese pythons are more common in the Everglades, where their population has exploded since the late 1980s. They were introduced to the wild in Florida after being abandoned by pet owners because they became too large to take care of.

In February, a video of an alligator and a Burmese python fighting in Florida had gone viral online. Such run-ins are not uncommon in south Florida, where the invasive Burmese python population continues to explode.