US President Joe Biden has been trolled online after he firmly gripped French President Emmanuel Macron's hand for a long period of time. 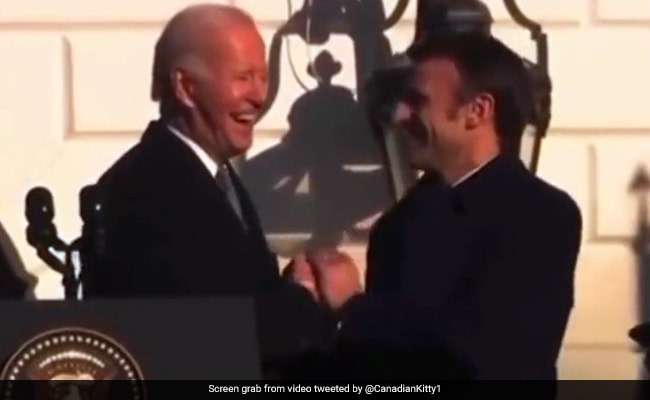 French President Emmanuel Macron is on a three-day state visit to the United States and was welcomed at the White House by the President of the United States Joe Biden. The meeting's most pressing agenda was the Russia-Ukraine conflict, as well as US subsidies to European countries, which the French President described as "super aggressive." The leaders also celebrated 200 years of US-French relations.

However, US President Joe Biden has been trolled online after he firmly gripped French President Emmanuel Macron's hand for a long period of time. In a video doing rounds on the internet, the handshake lasted roughly for about 40 seconds.

🇺🇸🇫🇷The handshake between Biden and Macron somehow dragged on, but what did observers notice? pic.twitter.com/j9ux7Pq3p7

The tweets has amassed lakhs of views and hundreds of likes. Several users commented on the video and labeled it as "awkward."

One user wrote, "Macron handled it like a champ but Biden persisted. Persisted in forgetting what he was doing there."

A third person said, "Biden forgot he was doing in This moment."

According to a report in the The Telegraph, Mr Biden also mispronounced the name of Mr Macron as "Macrone" which was rhyming with "alone".

The US President and first lady Jill Biden held a sumptuous, star-studded White House state dinner, featuring music from Jon Batiste and Chardonnay from the Napa Valley, in honour of French President Macron and his wife, Brigitte, as per a report in Reuters.

It was further added that Mr Biden said, "Tonight we celebrate the enduring alliance between France and the United States. Vive la France and God bless America." Mr Macron added that the two countries come from "the same values" of "we, the people."