The video has taken the internet by storm. It has garnered more than two million views and thousands of likes ad comments. 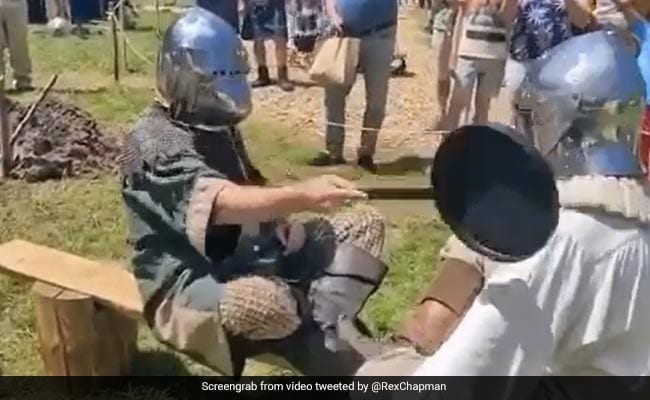 Contestants hit each other until one of them falls.

A video is going viral on the internet which shows people participating in a bizarre competition called “Pan-slapping contest”.

The short clip shared by former NBA player Rex Chapman shows two men taking turns to hit each other on the head as a small crowd watches them. The two participants are seen wearing metal knight helmets that protect their heads against any serious injury. Both of them continue hitting each other until one of them animatedly falls to the ground and the winner raises his hands in a victory dance.

Since being shared, the video has taken the internet by storm. It has garnered more than two million views and thousands of likes ad comments.

Reacting to the clip, one user jokingly wrote, “Mock not the traditions of my people.” “The hearing aid industry approves these shenanigans,” read another sarcastic comment. “I would hope, when extraterrestrial civilisations finally do reach earth; this is the first human activity they witness…” said third.

Meanwhile, the pan-slapping contest is not the only bizarre competition that exists. Back in March, the Arnold Sports Festival founded by Hollywood actor Arnold Schwarzenegger launched the very forest edition of the “Slap Fighting Championship”.

According to the official rules, the fight is comprised of three rounds with one slap per competitor in each round. Three judges score the flight, with a knockout determined based on a player's ability to continue fighting within 30 seconds of being slapped.

Before the “slap fighting championship” the first-ever professional “Pillow Fighting Championship” was also held in January 2022 in the United States.