Viral Video: Man Takes Nap With 2 Pythons Crawling Over Him, Internet Asks "How Can You Chill?"

A video is going viral on the social media where a man is taking nap with two large yellow pythons crawling on his body. 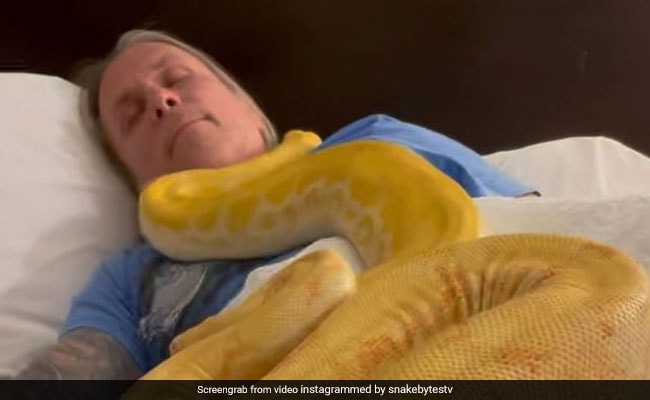 A man is taking nap with two large yellow pythons.

Internet is full of people posting videos about dangerous pet animals they keep. Among them is the slithery snake. The reptile is feared because of its venom and the sight of its flicking tongue can send chills down people's spine. Yet, there are some brave souls who keep snake as pet and post videos about the time spent with them.

One such video going viral on social media shows a man taking a nap with two large Burmese pythons (yellow in colour) crawling on his body. The serpents, however, are just seen crawling around without harming him.

"Sometimes after a long day, taking a nap with your favorites is a must! I can't be the only one," says the caption of the video posted on Instagram by Snakebytestv.

The video has garnered more than 1.3 million views and over 24,000 likes so far.

"Umm they sizing you up to eat you .... I know you remember Steve Erwin I think that was his name !! The animal man!" said another.

Others simply posted they were "afraid".

The handle is run by Brian Barczyk, a Michigan-based wildlife expert. Mr Barczyk is dedicated to educating animal lovers of all kinds about reptiles.

His Instagram bio says, "Traveling the world for animal adventures and daily vlogging it all!"

One of his videos went viral on social media in April this year where he was seen trying to kiss a Cobra on head in the presence of a huge audience. The video received more than 13,000 likes on Instagram.