Viral Video: Little Boy Greets Every Passenger He Meets While Boarding A Flight

Since being shared, the video has garnered over six million views and more than 417,000 likes. 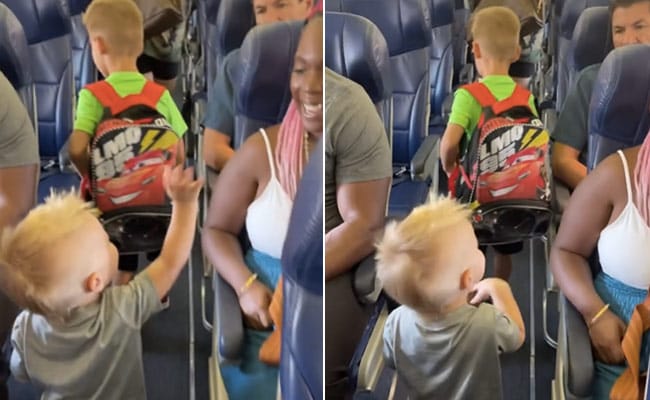 The video was shared by Keli Nelson, the mother of the 22-month-old baby boy.

Videos of children engaging in innocent activities usually grab eyeballs on the internet. This time too, an adorable clip of a little boy boarding a flight has caught the attention of netizens.

The video was shared on Instagram by Keli Nelson, who is the mother of a 22-month-old baby boy. While posting the clip, Ms Keli wrote, "Some good news for your feed. My social little 22-month-old greeting every passenger on every flight we took the past couple of weeks!"

The now-viral video opened to show a little boy following his elder brother to reach his designated seat on a flight. While walking forward, the 22-month-old was then seen adorably waving his hand and saying "Hi" to every passenger he came across on his way.

Since being shared, the video has garnered over six million views and more than 417,000 likes. Internet users flooded the comment section with heart and lovestruck emojis.

One user wrote, "This kid epitomizes how everyone in this world should be treating one another GOD continues to bless Him with Health Happiness, and this positive radiant energy and attitude. Hopefully, it's contagious." Another added, "This baby would make my day."

A third said, "Oh my goodness Sooooooo cute!! We should all be like this," while a fourth commented, "FANTASTIC... if we all had a little bit of the little boy.. the world would be so much nicer".

Social media users love to watch videos of children and their antics. A while back, another video went viral on social media which showed a small girl joining folk dancers on the streets and copying their steps like a pro. The video was shared on a tourism page named Visit Udipi on Twitter. It showed the little girl breaking into an impromptu dance during a street performance in Karnataka's Udupi.