3.9 million views for the video. 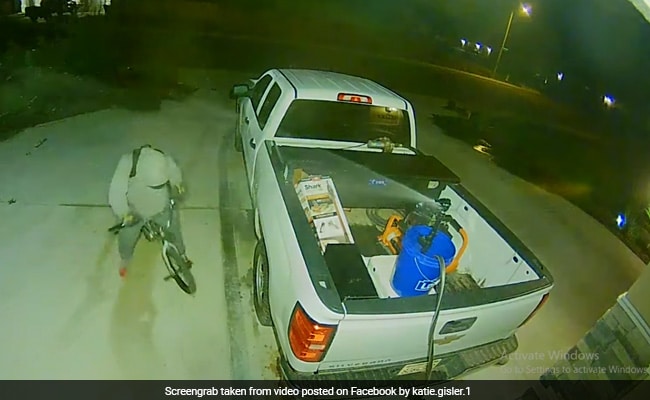 A viral video shows how a woman thwarted a burglary attempt.

A Southern California resident has impressed many by coming up with a simple and effective way to deter thieves. Katie Camarena, a resident of Porterville, shared a video on Facebook with a caption explaining how she thwarted a robbery attempt at her home. Her video has gone viral and left many social media users amused.

In the Facebook post shared Thursday, Ms Camarena said that she and her neighbours had been having issues with people stealing tools out of their vehicles. After flood lights did little to scare the thieves off, the California resident decided to take matters into her own hands and "have a little fun with a motion activated sprinkler that has an impressive amount of pressure."

Her idea proved very effective in driving away a would-be burglar.

Security camera footage that Katie Camarena shared online shows someone with their face covered cycling up her driveway. However, as soon as he reaches her truck, he is met with a powerful jet of water from a motion-activated sprinkler that follows him and forces him to turn around. The video ends with the burglar pedaling away furiously.

Since being shared online, the video has collected 3.9 million views, along with over 1.1 lakh 'shares' and 19,000 comments.

"Now that's genius," wrote one person in the comments section. "Add a strong dye to the water so it will stain their clothing," another said, while a third suggested "skunk oil".

"This is definitely going to start a new revolution!" a commenter remarked.

Ms Camarena said she ordered the sprinkler from Amazon.

What do you think of this idea? Let us know using the comments section.