Video: Lucky Escape For Man As Concrete Footpath Crumbles Under Him

Internet was quick to react to the video. While some users called the person a "lucky man," others jokingly said, "you broke it, you pay!" 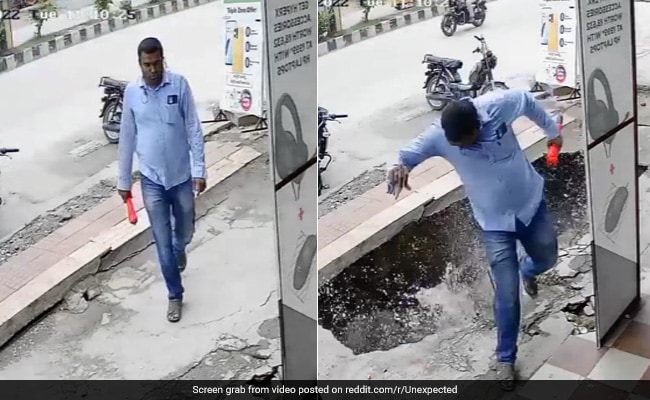 A shocking video of a man nearly escaping a major accident has surfaced online. The CCTV footage was shared on Reddit on Wednesday and since it has accumulated more than 50,000 upvotes.

"Just another normal day," read the caption of the post. The short clip shows a footpath cracking open just as a man walks over it.

In the video, one can see the man casually walking toward a store. However, moments later, as he walks over the concrete surface, it suddenly caves into the drainage below. In the end, the man's expression is enough to describe what could have gone horribly wrong.

Internet was quick to react to the video. While some users called the person a "lucky man," others jokingly said, "you broke it, you pay!"

One user commented, "I feel quite traumatised just after watching that.. like new fear unlocked level." Another hilarious added, "Strongest man in India." "When Yamraj is on lunch break," said third.

Meanwhile, back in June, in another similar incident, a policeman and his wife escaped with injuries after their two-wheeler fell into a drain inundated with rainwater. A video from the accident site showed the cop navigating the waterlogged road. This is when the front wheel hit something, and the couple catapulted into the drain water. People were seen rushing to rescue them.

It was later revealed that sewer lines were open and choked.

Friendship Day 2022: Know The Date, History And Significance Of The Day