A video gaining traction on social media shows a mans proposal being interrupted by a Disneyland employee. 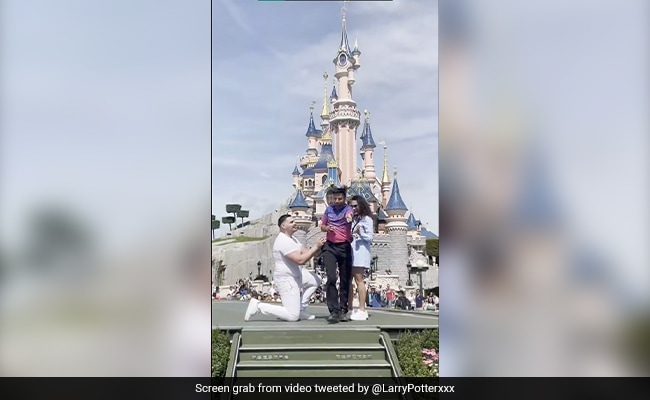 This is not the first time Disneyland Paris has been criticised online.

A video gaining traction on social media shows a man's proposal being interrupted by a Disneyland employee. The footage shows the man getting down on one knee at Disneyland in Paris against the backdrop of one of the park's iconic castles. As he opens the ring box, an employee runs onto the platform the couple is standing on and snatches it. He then gets off the elevated platform and asks the couple to get off, with both the man and woman looking incredibly confused.

The video has been shared online by countless users with many criticising the employee's rude and callous behaviour. One user @LarryPotterxxx wrote, “So @DisneyParis_EN condones employees being extremely condescending to guests? Is it in the manual that employees get to assault guests and snatch engagement rings from peoples hands mid proposal? Absolutely CRAZY #DisneyProposal #DisneylandParis.”

A Disney spokesperson told Newsweek, "We regret how this was handled. We have apologised to the couple involved and offered to make it right."

This is not the first time Disneyland Paris has been criticised online. In 2021 the theme park was forced to apologise to a mother after two members of its security staff ordered her to stop breastfeeding her baby in public.

While initially Disneyland had struck an unapologetic tone, saying only that mothers had the use of special rooms "with suitable and comfortable material such as special breastfeeding seats", it changed its tune after being castigated on Twitter by France's minister for citizenship, Marlene Schiappa, who was previously minister for gender equality.

"Dear @DisneylandParis, breastfeeding a baby is not an offence. It's good that you have dedicated rooms but no-one knows when and where a baby will be hungry," she wrote.