The video shows the giant gray whale appearing just inches away from the boat. 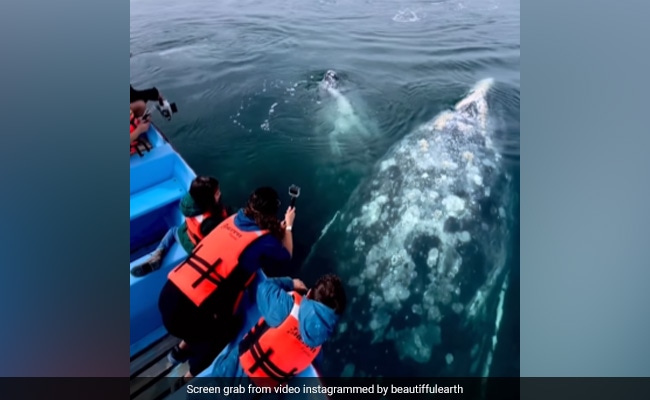 The video has accumulated more than 91,000 views on Instagram

A video of giant gray whales hovering close to a group of sightseers' boat is going viral on the internet. A group of Mexico's Baja California spotted a couple of grey whales recently. The video shows the giant appearing just inches away from the boat.

Along with the video, the caption read, "Magical moments with the giant gray whales of #BajaCalifornia in #Mexico! Tag someone you love to experience this with? Credits: @nats.m.f & @jcperusquia".

The video has accumulated more than 91,000 views on Instagram with over 50,000 likes. The video has terrified the internet, a user wrote, "Is anyone else scared ? I don't know why but this video scares me a lot." Another user commented, "Now once that tail slaps up n the boat goes flying don't say I ain't warn u."

The third user wrote, "They seem like such gentle giants. I could watch and listen to this all day!"

"Very beautiful, but unnecessary to get so close, the human being has no limits, ugh," the fourth expressed.

Gray whales are usually found in the North Pacific Ocean. These mammals can grow up to 15 meters (49 feet) long and weigh approximately 90,000 pounds, according to National Geographic. Gray whales are known to feed on a variety of species. They specialize in bottom feeding, focusing on amphipods-small, shrimp-like organisms that live in tube structures in mud. They also ingest other mud-dwelling invertebrates, including tube worms and mollusks.