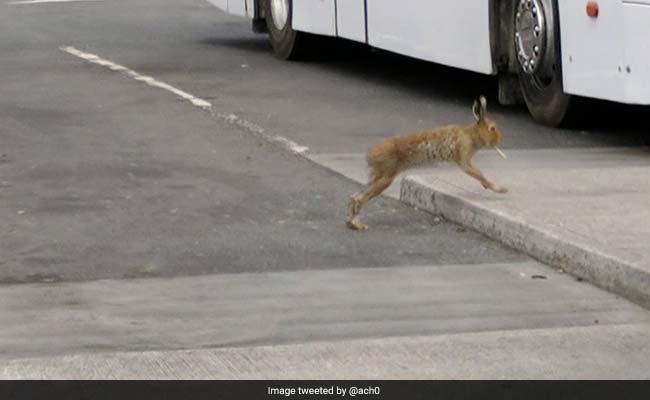 Tweeple have been sharing lots of comments on the picture.

A picture, which appears to show a hare smoking a cigarette, is currently making the rounds of the Internet. Tweeted by Louise Acheson from Edinburgh, Scotland, on May 28, the picture has gone viral with over 16,000 'likes' and more than 6,500 retweets. But is the picture what it seems to be? Let's find out.

"In things I never expect, a hare with a cigarette in its mouth just ran past me," Ms Acheson tweeted tagging Dublin Airport.

In things I never expect, a hare with a cigarette in its mouth just ran past me @DublinAirport! Duty free? #cigharette#nothingtodeclharepic.twitter.com/LqvHwX131T

Since being posted, tweeple have been sharing lots of comments on the picture. Many have also praised Ms Acheson for clicking the shot at the right time.

"Tell me you followed it and had some wacky adventures?" one Twitter user asks Ms Acheson. "I have seen that hare hanging out in the car park!! So cool you got a picture," says another.

"Was glad I managed it! Just happened to have phone in my hand. One other person saw it too, couldn't believe it, was glad to have a witness," Ms Acheson replies.

However, it was the official Twitter account of the Dublin Airport that explained what was actually happening in the picture.

Sorry to spoil all the online jokes, but don't think that hare has a cigarette in its mouth. It's more likely an overgrown tooth. https://t.co/QyoQnyRRkt

"An over grown tooth? That is more ridiculous than saying it's a cigarette (which it is a cig)," one Twitter user says. "Seriously, you expect us believe there is a sabre tooth hare running around Dublin, but not a smoking hare?" says another.

Promoted
Listen to the latest songs, only on JioSaavn.com
Others weren't happy the interesting story had been ruined. "You must be fun at parties," one Twitter user says.

But as it turns out, the team behind Dublin Airport's Twitter account does have a sense of humour after all.

.@ohare_k you mean don't let the tooth get in the way of a good story.