Viral: Friendly Advice About Failing In Your 20s From Phoebe Buffay

Actor Lisa Kudrow, better known as Phoebe Buffay from Friends, gave a stirring commencement address at her alma mater, Vassar College, in 2010. A short clip from the speech is suddenly viral again, with 33 million views and counting. Scroll down to see the video. 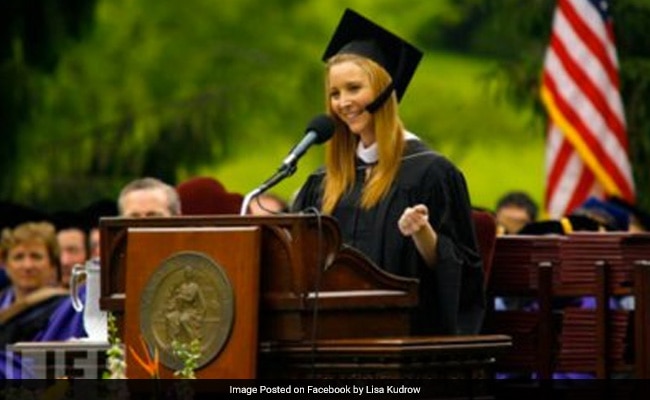 Lisa Kudrow, better known as Phoebe Buffay from 'Friends', spoke to graduates of Vassar College in 2010

Who do you turn to when you need some advice? A friend? Perhaps that's what explains why part of a seven-year-old graduation speech by actor Lisa Kudrow is suddenly viral again. Ms Kudrow, who played Phoebe Buffay in everyone's favourite sitcom Friends, speaks movingly about the importance of learning how to deal with failure. It's a message anyone, but especially young people, will relate to. And that's probably why it has been watched over 33 million times already.

Speaking to graduates at her alma mater, Vassar College, in 2010, Ms Kudrow reveals she was fired from another hugely successful sitcom, Frasier, and thought for sure that her acting career was over.

"I got fired. I got fired from Frasier, the one everyone knew was going to be a hit, and it was," she says. "It was really hard not to think that it wasn't meant to be, my career as an actress."

Ms Kudrow goes on to explain how a couple of months later, as she started running out of money, she began accepting small roles in other shows. And slowly started getting noticed. Then came a life-changing audition.

"After many auditions, I was the second person cast in the pilot called Friends Like Us, which would later be changed to Friends," Ms Kudrow says.

"One day the six of us were talking...exchanging The Time I Got Fired Stories and Jimmy (the director of the Friend's pilot) told them mine. "Well, she's got the worst one of all, she got fired from Frasier... it's a good thing you got fired or you wouldn't have been on this show." He was right," she says.

Ms Kudrow finishes with a line that's as surprising as it is relatable: "Thank God I got fired! Maybe there is a reason for everything. I think there is."


Since being posted on September 23, the video has been watched over 33 million times and shared over 3.5 lakh times already.

"Her story is a great reminder that when one door closes, another one opens," comments one person. "I totally needed to hear this," comments another.

The actor attended New York's Vassar College in the 1980s and graduated with a degree in biology. Interestingly, she never once took an acting class.Click for more trending news