After a recent flight, a man was left with a luggage that was so badly damaged that many assumed it had gotten stuck in the plane's engine. 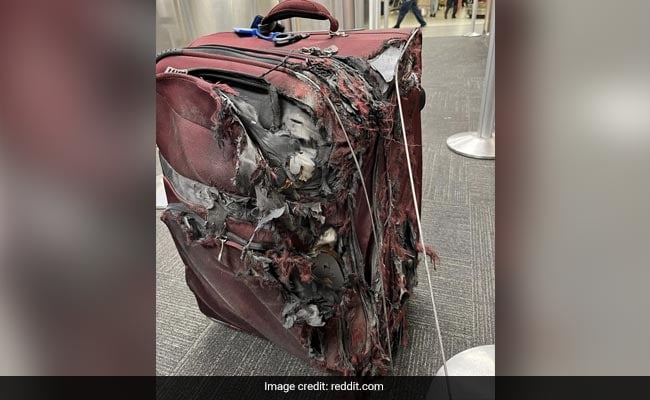 The picture has received more than 97,000 reactions.

One of the common worries that travellers have while commuting by plane from one place to another is the possibility of their luggage being damaged. Airport logistical mistakes frequently result in missing or damaged luggage.

One picture of such an incident can be seen in a viral Reddit post and displays a completely ruined suitcase.

The passenger's nephew posted a picture of the damaged suitcase online. "My uncle's suitcase after his flight," the caption read.

From top to bottom, the side of the bag was completely ruined, and the front zip portion was left with half of it shredded and exposed.

As a result of the man's misfortune while travelling, the viral post of the mangled suitcase has caused luggage concerns among passengers. Since then, shocked social media users have left over 97,000 replies and over 4,600 comments on the image.

As soon as they saw the condition of the suitcase, users of the internet were quick to express their outrage.

"Something used this suitcase as a chew toy," one person wrote.

Another user asked, "Did the flight land, or did they just throw it off on the way by?"

Did they light it on fire? Did the plane crash on top of the luggage? Was there a dragon chasing the plane? "So many questions," asked one reddit user sarcastically.

A few commenters believed they knew exactly what had happened. "I've worked in the airline industry for many years, and what this looks like is a tug driver accidentally running over the bag and getting stuck underneath as they drove around the airport. I've seen it happen a few times," wrote a user who claimed to be from the airline industry.