"A big shoutout to each of these 4 artists in the video.. Amazing," wrote Vidya Balan. 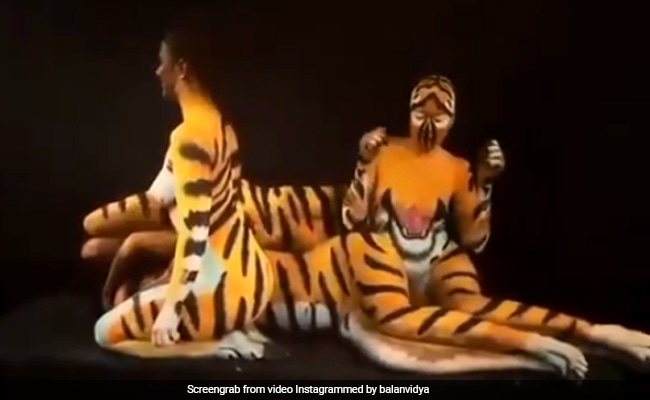 Vidya Balan's Monday motivation video is as fierce as it gets. To start the week, the Mission Mangal actress took to Instagram to share a dance performance clip that has left many amazed. The video she shared shows four artistes, wearing body paint in the pattern of a tiger's stripes, performing onstage.

In the comments section, many identified the dance form as Kerala's traditional Pulikali - the dance of tigers. Believed to have been introduced by erstwhile ruler of Cochin Maharaja Rama Varma Sakthan Thampuran two centuries ago, Pulikali is a symbolic representation of bravery and wild spirit.

"Honour the #TIGER in you," wrote Vidya Balan while sharing the video, which ends with the dancers arranging themselves into a complex position to form a tiger onstage. Ms Balan also praised the performers, writing: "A big shoutout to each of these 4 artists in the video.. Amazing."

Take a look at her video below:

The video has collected over a lakh views and hundreds of comments since being shared online.

"This is so amazing," wrote one person in the comments section. "Wow," said another, while a third added: "Kerala traditional pulikali".

2016 was the first time that women took part in Pulikali - a folk art which has been an exclusive bastion of male artistes.

On the work front, Vidya Balan announced on February 13 that she would next be seen in Sherni, to be directed by Amit Masurkar and produced by Bhushan Kumar. Her next release is Shakuntala, in which she plays the role of 'human computer' Shakuntala Devi.