A JCB was deployed to rescue the dog. 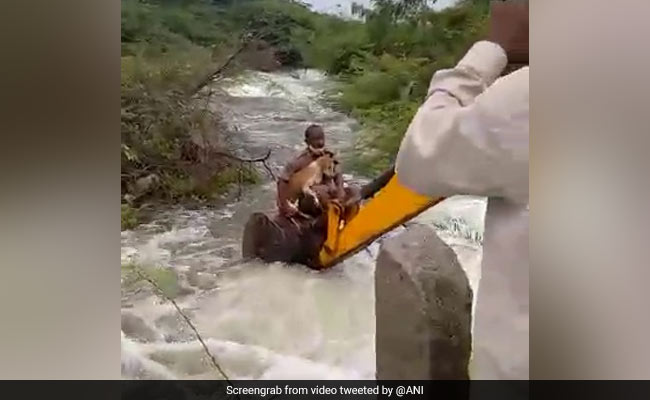 An official of the Telangana Police Department rescues a stray dog.

An official of the Telangana Police Department on Wednesday rescued a stray dog. The dog was stuck in bushes along the bank of a local stream which had overflowed due to heavy rains in the area, informed Gandhi Naik, Circle Inspector, Nagarkurnool Police Station.

A video of the incident has caught the attention of netizens. In the video, the police official could be seen pulling the dog out of the bushes and carrying it to the machine called for rescue.

While speaking to ANI over the phone, Naik said the local stream often overflows during the monsoon season, which is why a team of officials had already been deployed in the area in case of emergencies.

During his routine patrol, Mujeeb, the police official, noticed that the dog was stranded in the bushes and was unable to move, so he immediately called for a pit digging machine and rescued it.

#WATCH Telangana Home Guard jawan, Mujeed rescues a dog stuck in thick bushes at the bank of an overflowing stream in Nagarkurnool (16.09.20) pic.twitter.com/Se6V7VE1AC

"The local tank bund under the Nagarkurnool Police Station generally limits overflows during rains, similarly, yesterday due to heavy rain it overflowed, we deployed our officers around it to avoid public movements near the area, during patrolling our home guard Mujeeb noticed a dog stuck in the bushes between the water flow, we immediately called for a JCB nearby and Home Guard Mujeeb himself rescued the dog," he narrated.

The video has earned him much praise on social media. "God bless the guard and the whole team," wrote one person in the comments section of the video. "Wow. Great work," another remarked.