"This is ridiculously scary!" writes one commenter 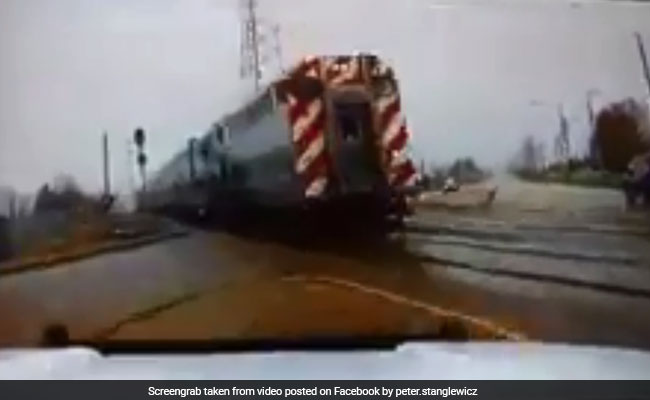 A dashcam footage has captured the moment a cop swerved to avoid an oncoming train.

A terrifying dashcam video has captured the exact moment a cop managed to narrowly avoid getting hit by a train. Shared by Peter Staglewicz, an officer with Mokena police in Illinois, USA, the footage shows him swerving to avoid colliding with a train at a crossing. The almost-collision occurred because of a problem with the crossing gate, according to ABC News.

Since being posted online on Friday, the video has gone viral on Facebook with over 7,500 shares.

"I just thought I wasn't born with luck at all. Little did I know, I had luck, I was just saving it all up for the perfect time. Here is all my luck being used ALL AT ONCE. If I never win anything again, I'm perfectly fine with that," wrote Mr Staglewicz while sharing the video.

Since being shared online, the video has collected a ton of response from scared viewers.

"This is ridiculously scary! I have crossed these tracks many times but it can happen anywhere," writes one commenter. "Oh wow. Your Guardian Angel was working double time there!" says another.

Transport operator Metra said there was a problem with an electrical short in the crossing gate. According to ABC News, the equipment was repaired a few hours later.

Last month, a cyclist's narrow escape from an oncoming train was captured on camera.