While some internet users laughed over the craze of recording such videos in public places, others wanted to get a glimpse of the final product. 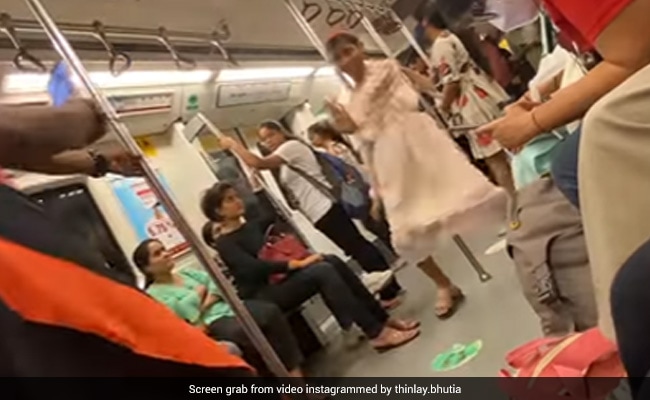 The video has garnered more than 3 million views and over 109,000 likes.

A video showing a girl dancing inside a Delhi Metro coach is going viral on the internet. The clip was shared on Instagram by user Thinlay Bhutia. Since being posted, it has garnered more than 3 million views and over 109,000 likes.

"Confidence ho toh aisa (This is confidence)," read the caption of the post.

In the video, the girl, wearing a white dress, is seen standing in the middle of the metro coach as a friend with the camera gives her a countdown to begin her performance. The young girl grooves to the beat of a song that can be heard faintly in the background. While she performs her choreography, some passengers can be seen stealing glances.

Internet users flooded the comment section with all sorts of reactions. While some laughed over the craze of recording such videos in public places, others wanted to get a glimpse of the final product.

"I can't even pick up a call, where do you get such confidence from?" wrote one user. "Mai front camera bhi on kardu aisi bheed me muje anxiety hojati hai (If I just open the front camera in such a crowded place, I start feeling anxious.)" added another.

Viral Video | Sikh Student With Kirpan Arrested At US University

Meanwhile, over the years, the Delhi Metro has seen a fair share of viral moments. Last month, a passenger named Pranjal Dubey displayed a rare gesture while travelling in a Delhi Metro. After accidentally spilling food on the metro floor, Mr Dubey proceeded to wipe the area clean with his handkerchief instead of turning a blind eye to it.

The incident was shared by the My Gov India Twitter handle along with pictures of Mr Dubey cleaning the metro floor.