The shocking incident took place at a Badoni School in Shajapur, Madhya Pradesh. 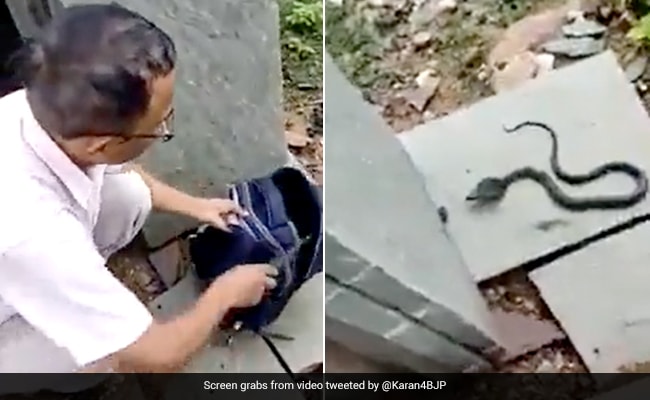 Luckily no one was harmed during the incident.

In a terrifying incident, a huge cobra was recently found curled up inside a school girl's backpack in Madhya Pradesh. According to a Twitter post by Bharatiya Janata Party (BJP) worker Karan Vashistha, the shocking incident took place at a Badoni School in Shajapur.

In the caption, Mr Vashistha informed that the snake was found in a class 10 student's backpack. He even shared a video of the incident, which showed a man unzipping the school bag and taking out all the books in a bid to get rid of the snake.

Mr Vashistha said that after reaching school early morning, the student told the teachers that she felt something moving in her bag. Upon inspection, the teachers then found the snake curled up inside the rucksack.

The end of the clip showed a huge cobra slithering away, leaving everybody terrified about what they had witnessed. Luckily no one was harmed during the incident, Mr Vashistha informed.

Viral Video | Penguin Gets Mixed With Another Group, Friend Goes To Take It Back

Notably, a cobra's venom is poisonous enough to kill up to 20 people with just one bite. They can grow up to six and a half feet long, and they generally prey upon mammals as an adult, and amphibians, small snakes and lizards when juvenile.

Meanwhile, in another strange instance, a woman was recently seen resting on a cot even as a cobra climbed up her back. A video shared on social media showed a snake perched on the top of the woman while she remained in the same position and apparently called out for help.