The eastern brown snake is highly venomous and responsible for the majority of snakebite deaths in Australia. 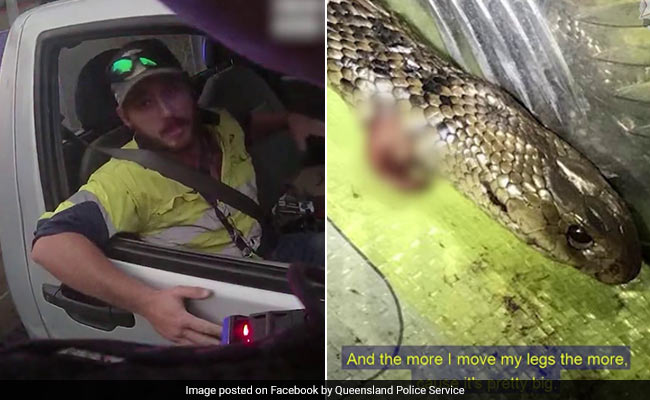 A man had to fight off a venomous eastern brown snake while driving.

A man in Australia was recently pulled over for speeding on the highway, but cops soon realised he had a legitimate reason for doing so - he had just fought off one of the world's deadliest snakes and was rushing to the hospital.

According to a statement released by Queensland Police on Monday, the driver - identified only as "Jimmy" - was driving down the Dawson Highway in the state of Queensland when he noticed an angry brown snake slithering towards his leg.

Jimmy had encountered an eastern brown snake - a highly venomous reptile that is responsible for the majority of snakebite deaths in Australia, reports CNN.

The driver used a seat belt and a nearby knife to fight the snake off while trying to stop his car. "Fearing he had already been bitten and his life was in danger, Jimmy believed he had no other option but to kill the snake and take it with him to hospital," said Queensland Police in its press release.

Cops noticed him speeding down the highway and pulled him over. A video of the ensuing conversation was shared by police on social media. It also shows the snake that was killed by the driver.

Although the traffic officer had heard his fair share of excuses for speeding, he soon realised this was not just another colourful tale and promptly sought medical assistance for Jimmy, police said in its statement.

Paramedics arrived at the scene and found that Jimmy had not actually been bit, but was certainly suffering from shock.

"It was pretty terrifying, I've never been so happy to see red and blue lights," Jimmy said.

In a similar incident in 2018, a man found a venomous red-bellied black snake slithering out of his car's bonnet while he was driving in New South Wales, Australia.