Video: Greek Footballer Kostas Manolas 'Terrified' After Lion Roars At Him During A Photoshoot

The video starts with the footballer posing for some club photos in full kit next to a lion. 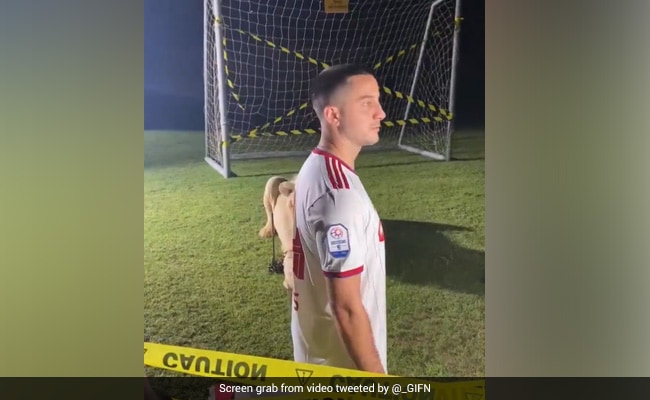 The video has received 5.5 million views

Greek footballer Kostas Manolas was made to pose next to an actual lion in a new video. Former Roma defender was roped in by UAE Pro League team Sharjah FC last week and during his signing announcement, he went through some disturbance. Mr Manolas' reaction to the lion's mighty roar is now going viral.

The video starts with the footballer posing for some club photos in full kit next to a lion to mark Mr Manolas' arrival at Sharjah FC. Moments later, the lion seemed a little agitated and released a mighty roar in the footballer's direction. The footballer got so scared that he jumped in fear and stepped over the caution tape in an attempt to get away from the predator.

Former Napoli and Roma defender Kostas Manolas had to pose alongside a lion in his signing announcement with Sharjah FC.pic.twitter.com/g0MJvsDh3G

Posted on Twitter by the user Get Italian Football News, the video has received 5.5 million views. Manolas was signed by Sharjah FC and referred to him as a Greek warrior.

Internet cracked up after watching the video, a user wrote, "The unthinkable unfolds before our eyes," another user wrote, "The Greek god has risen from the ruins." "People need to learn the art of saying NO to things they're not comfortable with," the third comment read. "That's fun, but I don't actually laugh at him. I totally understand his fear," the fourth wrote.