The woman's sister Camille Johnson revealed that the healthcare centre did not even evaluate her for depression or other mental illnesses. 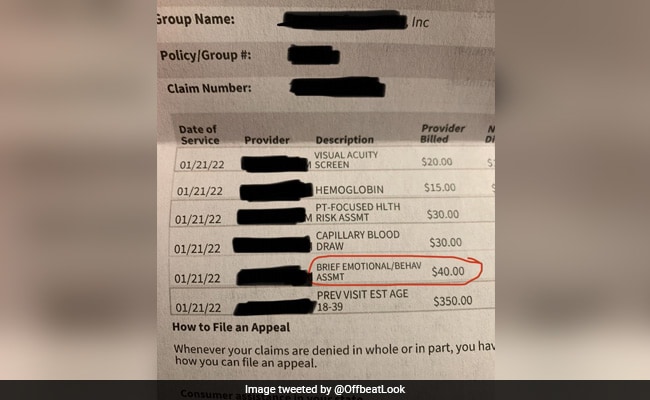 A US woman recently shared that her sister was charged $40 (nearly Rs 3,100) “for crying” at a doctor's appointment.

Taking to Twitter, Camille Johnson, who is a popular YouTube and internet personality, shared a picture of her sister's medical bill in which she highlighted a segment of the bill that docked her sibling for a “brief emotional/behavioural assessment”. In the following tweet, she explained that her sister has a “rare disease” and “got emotional because she feels frustrated and helpless” as she is struggled to find care.

My little sister has been really struggling with a health condition lately and finally got to see a doctor. They charged her $40 for crying. pic.twitter.com/fbvOWDzBQM

The itemised medical bill showed that Ms Johnson's sister had visited the doctor back in January for her condition. The various cost of the doctor's visit included a vision assessment test priced at $20, a $15 haemoglobin test, a capillary blood draw for $30 and a preventative health screening which cost $350. However, what caught Ms Johnson's attention was the $40 charge for “crying”.

In a Twitter, thread, the 25-year-old wrote, “One tear in and they charged her $40 without addressing why she is crying, trying to help, doing any evaluation, any prescription, nothing.”

Since being shared, the photo has gone viral with more than 486,000 likes and thousands of comments. Internet users shared their own experiences with overcharged medical bills, while others offered tips and advice on how to negotiate hospital bills.

“When I got surgery this past June to remove a tumour, I asked them what ‘Women's services' was for. It was for the pregnancy test they administered,” one person wrote, adding, “$1,902 to pee and for them to dip a stick into it. Thankfully most was covered by insurance but geez”. “Tell me you live in America without telling me that you live in America,” another person replied.

According to the Independent, a brief emotional/behavioural assessment is a mental health screening that tests for signs of attention-deficit/hyperactivity disorder (ADHD), depression, anxiety, suicidal risk or substance abuse. It is usually issued as a questionnaire that is handed out and filled in before seeing the doctor.

However, Ms Johnson told the media outlet that her sibling was never evaluated. She reportedly claimed that the doctor at the unnamed medical facility noticed her sister's tears but said nothing. Ms Johnson revealed that the health care centre did not evaluate her sister for depression or other mental illnesses. Her sibling did not even talk to a specialist, was not referred to anyone nor was she prescribed anything.

The 25-year-old said that thankfully her younger sister was covered by her father's insurance plan, which helped pay for the medical services. Now, Ms Johnson hopes that sharing her sister's medical bill online can help change how the US healthcare system treats others.